A Masterclass in Classic and Contemporary Patisserie 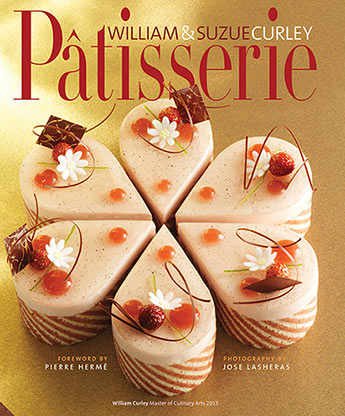 Patisserie aims to reflect award-winning chocolatier, William Curley's passion for taking classic recipes and modernizing them with his own innovations.

Patisserie reflects award-winning chocolatier, William Curley's passion for taking classic recipes and modernizing them with his own innovations. Creating top-quality patisserie is often seen as something only a trained professional can do, however with patisserie equipment now easily accessible to all, William hopes to unscramble the mystique of his exquisite creations and get everyone making perfect patisserie in the home kitchen. Patisserie processes are broken down into a step-by-step guide complete with expert knowledge from this master patissier to produce flawless creations every time.

A series of basic recipes - covering sponges, creams and custards, pastry and syrups - will provide a solid foundation in patisserie techniques as well as inspiration for aspiring creative pastry chefs. At the same time, some classic recipes, from Rhum Baba to Tarte Alsacienne, are given a modern adaptation using William's unique blend of flavours. William has always had a long-term ambition to bring patisserie to this country as an accessible, affordable yet uncompromising luxury. His main focus is to arouse and surprise the taste buds. A pleasure that he hopes he can bring to everyone, through the recipes in this gorgeous book.
More books by this author

William Curley's career began with an apprenticeship at Gleneagles Hotel, followed by several years at numerous Michelin- starred establishments, working with respected chefs including Pierre Koffmann at La Tante Claire, Raymond Blanc at Le Manoir aux Quat' Saisons, Marco Pierre White at The Restaurant and Marc Meneau at L'Esperance in France. William then became Chef Patissier at The Savoy Hotel, where he met fellow patissiere and future wife Suzue, whose Japanese heritage influences many of the flavours found in their recipes. In 2004, they opened their first chocolate shop in Richmond, followed by the opening of their equally successful Belgravia store. Increasing demand for their chocolate and patisserie creations led to a William Curley concession opening in Harrods. William Curley has been awarded Britain's Best Chocolatier by the Academy of Chocolate four times and has won numerous other awards.