Tempting Recipes from the March Sisters and Their Friends and Family 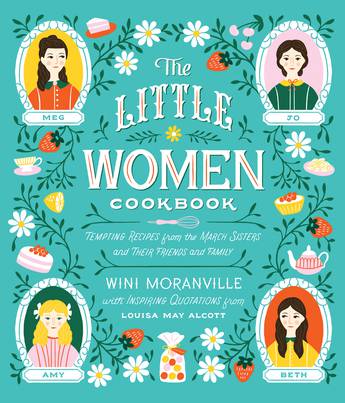 Now fans of the classic book (and current movie) Little Women can experience the foods that bring such pleasure to the March sisters and their family and friends.

Experience the exciting and heartwarming world of the March sisters and Little Women right in your own kitchen. Here at last is the first cookbook to celebrate the scrumptious and comforting foods that play a prominent role in Louisa May Alcott's classic novel Little Women. If your family includes a Little Women fan, or if you yourself are one, with this book you can keep the magic and wonder of the beloved tale alive for years to come.
Do you wonder what makes the characters so excited to make-and eat!-sweets and desserts like the exotically named Blancmange or the mysterious Bonbons with Mottoes, along with favorites like Apple Turnovers, Plum Pudding, and Gingerbread Cake? Find out for yourself with over 50 easy-to-make recipes for these delectable treats and more, all updated for the modern kitchen. From Hannah's Pounded Potatoes to Amy's Picnic Lemonade, from the charming Chocolate Drop Cookies that Professor Bhaer always offers to Meg's twins to hearty dinners that Hannah and Marmee encourage the March sisters to learn to make, you'll find an abundance of delicious teatime drinks and snacks, plus breakfasts, brunches, lunches, suppers, and desserts. Featuring full-color photos, evocative illustrations, fun and uplifting quotes from the novel, and anecdotes about Louisa May Alcott, this is a book that any Little Women fan will love to have.
More books by this author

Wini Moranville grew up in Des Moines, Iowa, and attended the University of Iowa, graduating with a BA in French and English. She subsequently moved to New York City, where she worked for Societe Generale (a French bank), Elle magazine, and Oxford University Press. She has served as a writer and editor for numerous cookbooks She currently writes a monthly wine column for Relish magazine, a food magazine launched in February 2006, with a circulation of over 15 million, distributed through daily newspapers nationwide. Moranville is a member of the James Beard Foundation, and has served as a Restaurant Awards panelist since 2005.

Louisa May Alcott was an American novelist best known as author of the novel Little Women and its sequels Good Wives, Little Men, and Jos Boys. Raised in New England by her transcendentalist parents, Abigail May and Amos Bronson Alcott, she grew up among many of the well-known intellectuals of the day, such as Ralph Waldo Emerson, Nathaniel Hawthorne, and Henry David Thoreau. Nevertheless, her family suffered severe financial difficulties and Alcott worked to help support the family from an early age. She began to receive critical success for her writing in the 1860s.