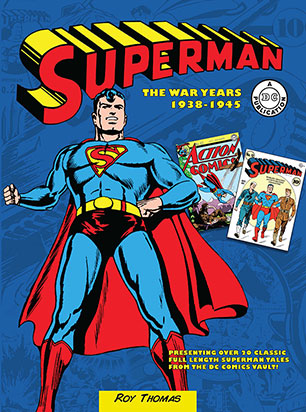 New compilation of comic books from the early years of Superman detailing his involvement in WW2. First time ever look at Superman in this view of war.

Superman was not like any previous comic book character. He was the first costumed man with two identities, who possessed extraordinary strength and powers. He would protect the public when ordinary measures would not do. He was not the first super hero, but the Man of Steel would become the prototype for all super heroes thereafter.
More books by this author

Having co-founded the super-hero comics fanzine Alter Ego in 1961, Roy Thomas (b. 1940) became writer/assistant editor for Stan Lee at Marvel Comics in 1965 after a very brief stint as assistant editor of DC's Superman titles.For the German publisher Taschen he has written the humongous book 75 Years of Marvel: From Golden Age to Silver Screen, (released in late 2014) and is also writing an equally huge book about Marvel's Stan Lee. Besides winning numerous other fan and pro awards in the comics field over the years, he was elected to comics' Eisner Hall of Fame at the 2011 San Diego Comic-Con.