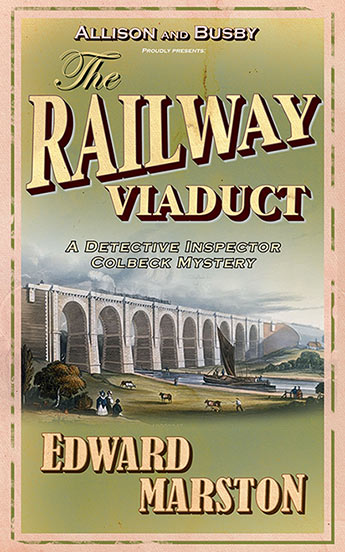 As a train speeds over the Sankey Viaduct, the dead body of a man is hurled into the canal below. Inspector Robert Colbeck and Sergeant Victor Leeming take charge of their most complex and difficult case yet. Hampered by the fact that the corpse has nothing on him to indicate his identity, they are baffled until a young woman comes forward to explain that the murder victim, Gaston Chabal, is an engineer, working on a major rail link in France. As the case takes on an international dimension, problems accumulate. The detectives wonder if the murder is connected to a series of vicious attacks on the rail link that is being built by British navvies under the direction of a British construction engineer. Colbeck and Leeming have to survive personal danger, resistance from the French government, broadsides from their Superintendent, and many other setbacks before they solve the crime.
More books by this author More books in this series

Edward Marston was born in Cardiff in 1940 and lived there until 1959. His first novel, BREAKS (written under his real name Keith Miles) was set in Cardiff and his is still now a member of the Welsh Academy. A full-time writer for over thirty years, he has worked in radio, film, television and the theatre, and is a former chairman of the Crime Writers’ Association. Prolific and highly successful, he is equally at home writing children’s books or literary criticism, plays or biographies and settings for his crime novels range from the world of professional golf to the compilation of the Domesday Survey. The Iron Horse is the fourth book in the series featuring Inspector Robert Colbeck and Sergeant Victor Leeming, set in 1850s London.