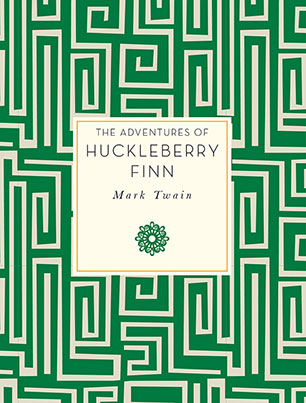 Revel in Huck Finn's adventure on the Mississippi River in this American masterpiece by Mark Twain.

A favorite among young readers and adults alike, Mark Twain's Adventures of Huckleberry Finn, first published in 1884, is considered to be the author's masterpiece, as well as one of the best American novels ever written.

In order to escape his abusive father, Huckleberry Finn fakes his own death. He meets up with the runaway slave Jim, and the two begin a new, carefree life on a raft traversing the Mississippi River. Despite their travels bringing them more trouble than expected and the fear of being returned to their old lives, Huck Finn and Jim form a bond that helps protect them from the judgments of a hypocritical society that claims to value civilization even as it benefits from the horror of slavery.

Many readers see Adventures of Huckleberry Finn as a children's book because Huck is a boy. However, the book's moral themes and metaphors are relevant for almost any age and situation. Huck rejects his Aunt Sally's attempts to protect him in favor of the entering the unknown wild. He simply values his own personal freedom and sense above all else - a quintessential American trait.

Complete and unabridged, this elegantly designed, clothbound edition features an elastic closure and a new introduction by Steven Frye.
More books by this author More books in this series

MARK TWAIN (1835-1910) grew up in Hannibal Missouri. He began his career as a journeyman printer and journalist. His youthful experiences along the Mississippi inspired some of his most famous works--and The Adventures of Huckleberry Finn. In addition to his well-known works of fiction, he was also a prolific travel writer. Among his best-known works is Life on the Mississippi. He was also a star of the lecture circuit.

STEVEN FRYE is a Ph.D. graduate of Purdue University and Professor of English at California State University, Bakersfield. He the author of Understanding Cormac McCarthy and editor of the 2011 Cambridge Companion to Cormac McCarthy.