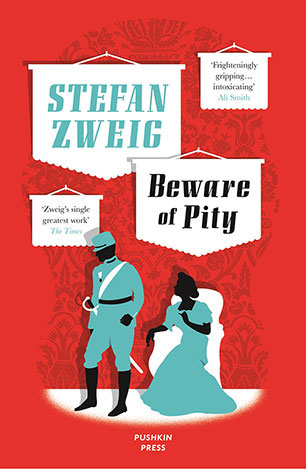 A tense and powerful tale of unrequited love and the danger of pity.

In 1913 a young second lieutenant discovers the terrible danger of pity. He had no idea the girl was lame when he asked her to dance - his compensatory afternoon calls relieve his guilt but give her a dangerous glimmer of hope. Stefan Zweig's only novel is a devastating depiction of the torment of the betrayal of both honour and love, realised against the background of the disintegration of the Austro- -Hungarian Empire.
More books by this author

Stefan Zweig was born in 1881 in Vienna, into a wealthy Austrian-.-Jewish family. He studied in Berlin and Vienna and was first known as a poet and translator, then as a biographer. Between the wars, Zweig was an international bestseller with a string of hugely popular novellas including Letter from an Unknown Woman, Amok and Fear. In 1934, with WC the rise of Nazism, he left Austria, and lived in London, Bath and New York-a period during which he produced his most celebrated works: his only novel, Beware of Pity, and his memoir, The World of Yesterday. He eventually settled in Brazil, where in 1942 he and his wife were found dead in an apparent double suicide. Much of his work is available from Pushkin.