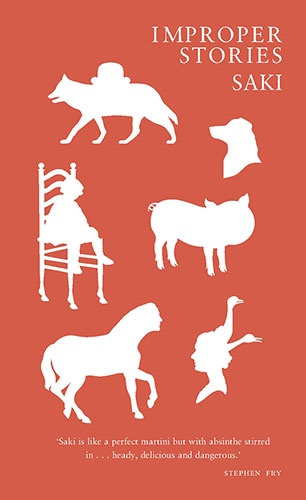 Eighteen sharply satirical and deliciously disturbing tales by Saki, the Edwardian master of the short story.

Eighteen deliciously disturbing tales by Saki, the Edwardian master of the short story. Saki's sharp satire pierces the polite veneer of country house parties, hunting meets, and evenings round the pianola. Wild beasts stampede through the drawing room, servants suffer murderous delusions and sinister children plot revenge on their elders. These witty, macabre and sometimes bizarre stories cut through the social conventions of the Edwardian upper classes.
More books by this author

Saki, or Hector Hugh Munro, was born in 1870 in Burma, where his father was inspector general for the Burma police. After his mother's death when he was two years old, he was sent to England to be brought up by his grandmother and aunts. After schooling and a stint in the Burma police, he returned to England and started his career as a journalist, and began to write short stories that were published as Reginald (1904), Reginald in Russia (1910), The Chronicles of Clovis (1911) and Beasts and Super Beasts (1914). He also wrote two novellas: The Unbearable Bassington (1912) and When William Came (1913). When the First World War broke out, although at forty-three he was officially too old to fight, he joined the Royal Fusiliers. He was killed by a German sniper near Beaument-Hamel, France.