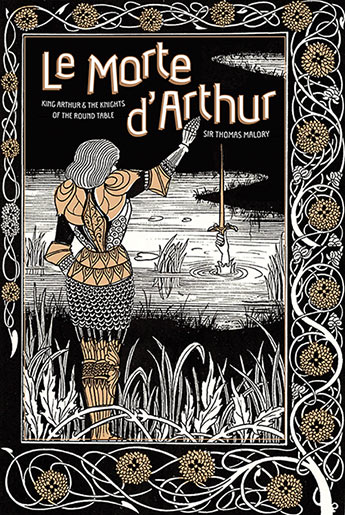 Originally published in 1485, Sir Thomas Malory's Le Morte d'Arthur remains the most exciting and magical interpretation of the legend of King Arthur and the Knights of the Round Table.

Le Morte d'Arthur is an exciting, magical interpretation of the legend of King Arthur.

The next elegant edition in the Knickerbocker Classic series, Le Morte d'Arthur is unabridged and complete. Originally published in 1485 by William Caxton, Sir Thomas Malory's Le Morte d'Arthur remains the most exciting and magical interpretation of the legend of King Arthur and the Knights of the Round Table.

For Arthurian fans worldwide, this stunning gift edition has a cloth binding, ribbon marker, and is packaged neatly in an elegant slipcase. Featuring a new introduction and the elegant illustrations by Aubrey Beardsley (1872-1898), this volume of Le Morte d'Arthur is an indispensible classic for every home library.
More books by this author More books in this series

Not much is known about Sir Thomas Malory, who was born in England in the early fifteenth century. He is believed to have been a knight and is known as the compiler and/or writer of Le Morte d'Arthur, which he completed around 1470.Aubrey Beardsley (1872-98) was a book illustrator, caricaturist, poster-designer and novelist. He was closely associated with The Yellow Book, and illustrated The Rape of the Lock, The Lysistrata of Aristophanes and Oscar Wilde's Salome. Charles Robinson (1870- 37) was one of the most popular and prolific black-and-white artists of the Edwardian era. Brother of the artists Thomas and William Heath Robinson, he came to prominence when asked to illustrate Robert Louis Stevenson's A Child's Garden of Verses.