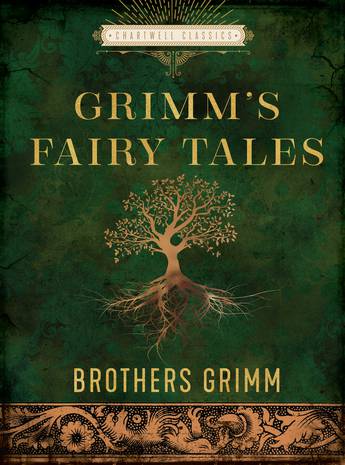 Share and enjoy all of the Grimm Brothers' best works in The Essential Grimm's Fairy Tales, now designed in a beautiful, jacketed hardcover format.

The Essential Grimm's Fairy Tales contains 59 of the best-loved bedtime stories for children worldwide, enjoyed for the better part of two centuries. Originally collected by the Brothers Grimm, Jacob and Wilhelm, these German linguists and cultural researchers gathered legendary folklore and aimed to share the stories exactly as they heard them. This volume features all of your favorite tales, including:

This elegantly designed jacketed hardcover edition features an introduction by fantasy literature scholar Lori Campbell, a timeline of the life and times of the Brothers Grimm, and over 100 illustrations by Arthur Rackham.

Other titles in the Chartwell Classics Series include: Complete Fiction of H.P. Lovecraft; Complete Grimm's Fairy Tales; Complete Novels of Jane Austen; Complete Sherlock Holme; Complete Tales & Poems of Edgar Allen Poe; Complete Works of William Shakespeare; Divine Comedy; Alices Adventures in Wonderland and Other Tales;The Essential Tales of H.P. Lovecraft; The Federalist Papers; The Inferno; The Call of the Wild and White Fang; Moby Dick; The Odyssey; Pride and Prejudice; Emma; The Great Gatsby; The Secret Garden; Anne of Green Gables; The Essential Tales and Poems of Edgar Allan Poe; The Phantom of the Opera; The Communist Manifesto and Das Kapital; Republic; Frankenstein; Twenty Thousand Leagues Under the Sea; The Picture of Dorian Gray; Meditations; Wuthering Heights; Alice's Adventures in Wonderland and Through the Looking-Glass; A Tales of Two Cities; Beowulf; The Strange Case of Dr. Jekyll and Mr. Hyde and Other Stories; Adventures of Huckleberry Finn; Little Women
More books by this author

The Brothers Grimm, Jacob (1785-1863) and Wilhelm Grimm (1786-1859), were German academics, linguists, cultural researchers, and authors who together collected folklore. They are among the most well-known storytellers of European folk tales, and their work popularized such stories as “Cinderella,” “The Frog Prince,” “Hansel and Gretel,” “Rapunzel,” “Rumpelstiltskin,” and “Snow White.”Arthur Rackham was an English book illustrator whose work was part of a turning point in the production of books--being able to feature accurately represented color artwork. Considered one of the leading figures during the Golden Age of British book illustration, Rackham is best known for his illustrations for Rip Van Winkle, Peter Pan in Kensington Gardens, and Fairy Tales of the Brothers Grimm.