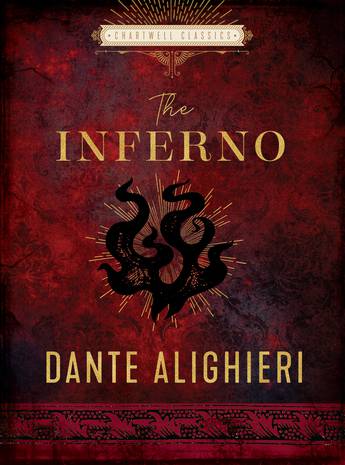 Dante's The Inferno is the first part of his masterpiece, The Divine Comedy. This edition uses the classic translation by the poet Henry Wadsworth Longfellow (1807-1882).

Journey into Dante's nine circles of Hell in the epic poem, Inferno, with this elegant, unabridged edition featuring the classic translation by the poet Henry Wadsworth Longfellow (1807-1882).

The Divine Comedy, written in the early fourteenth century by Dante Alighieri, continues to be essential reading for lovers of literature. The Inferno is the first part of Dante's masterpiece, The Divine Comedy. In this epic poem, Dante is led by the poet Virgil into the nine circles of Hell-limbo, lust, gluttony, greed, anger, heresy, violence, fraud, and treachery-culminating in a meeting with Satan himself. Along the way, he meets a number of interesting figures. Complete and unabridged, this beautifully designed, hardcover edition with jacket features an introduction by Renaissance literature and history scholar John Lotherington and a biography detailing the life and times of Dante Alighieri.

Other titles in the Chartwell Classics Series include: Complete Fiction of H.P. Lovecraft; Complete Grimm's Fairy Tales; Complete Novels of Jane Austen; Complete Sherlock Holme; Complete Tales & Poems of Edgar Allen Poe; Complete Works of William Shakespeare; Divine Comedy; Alices Adventures in Wonderland and Other Tales;The Essential Tales of H.P. Lovecraft; The Federalist Papers; The Call of the Wild and White Fang; Moby Dick; The Odyssey; Pride and Prejudice; The Essential Grimm's Fairy Tales; Emma; The Great Gatsby; The Secret Garden; Anne of Green Gables; The Essential Tales and Poems of Edgar Allan Poe; The Phantom of the Opera; The Communist Manifesto and Das Kapital; Republic; Frankenstein; Twenty Thousand Leagues Under the Sea; The Picture of Dorian Gray; Meditations; Wuthering Heights; Alice's Adventures in Wonderland and Through the Looking-Glass; A Tales of Two Cities; Beowulf; The Strange Case of Dr. Jekyll and Mr. Hyde and Other Stories; Adventures of Huckleberry Finn; Little Women
More books by this author

Dante Alighieri (c. 1265-1321) was an Italian poet, writer, and political thinker. After studying at the University of Bologna, he married and had four children. Dante was exiled from his hometown of Florence in 1302 due to his political leanings, finally settling in the city of Ravenna in 1307, when he began writing The Divine Comedy.Henry Wadsworth Longfellow was an American poet whose most famous works include "Paul Reveres Ride", The Song of Hiawatha, and Evangeline. He was the first American to translate Dante Alighieris Divine Comedy and was one of the Fireside Poets from New England.