Tarzan of the Apes and The Return of Tarzan (Knickerbocker Classics) 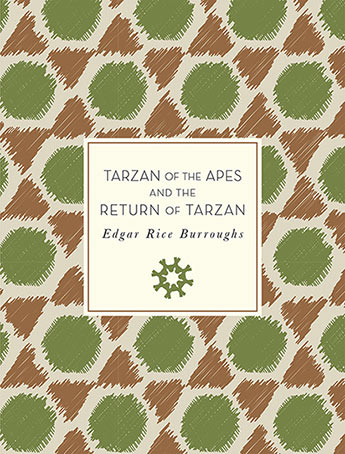 Tarzan of the Apes (1912) and The Return of Tarzan (1913) recount the adventures of John Clayton, a man who was raised by apes after the death of his parents. Clayton was renamed 'Tarzan' by the apes, and grew up in the wild without knowledge of his humanity. Both novels are classic examples of American pulp fiction, portraying Tarzan as the quintessential strong, wild, able-bodied hero.

This elegantly designed clothbound edition features an elastic closure and a new introduction.
More books by this author More books in this series

Edgar Rice Burroughs (1875-1950) was an American writer, soldier, cowboy, and pencil sharpener salesman. He is best known for his Tarzan and John Carter of Mars series. However, Burroughs wrote almost 100 novels before he died of a heart attack. He is buried in the town of Tarzana, which was named after his ranch just north of Los Angeles.

Darren Harris-Fain is a professor of English at Auburn University at Montgomery. An expert on British and American literature from the late nineteenth century to the present, he regularly publishes on the American novel, science fiction and fantasy, and comics and graphic novels.