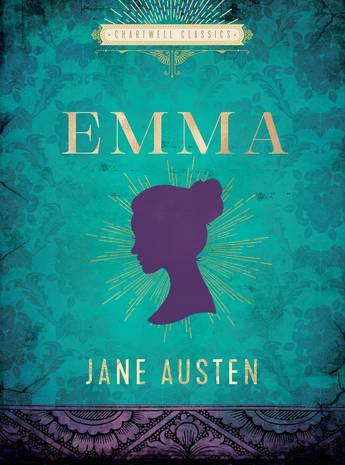 Dive into a world of romance, village life, and even a little silliness in Jane Austen's timeless novel. Despite the fact that Jane Austen set out to write a story with a heroine whom she said that "no one but myself will much like," Emma has resonated with readers since its original publication in 1815 and has been retold many times for television and movies.Self-satisfied Emma Woodhouse thinks she is above romance of any kind, but when she decides she is a great matchmaker and sets out to find a wealthy husband for her friend, the sweet yet pitiable Harriet Smith, she crosses paths with the charming Mr. Knightley. Even though Emma tries to ignore her feelings for him, she ends up marrying him and realizes that "Perfect happiness, even in memory, is not common." Beyond the romance, Emma is full of humor and wit and is also a commentary on upper-class social manners at the turn of the nineteenth century. The title character herself, rather you love her or hate her, is both inescapably self-delusional and rather fun to imagine.

Complete and unabridged, this elegantly designed, jacketed hardcover edition features an introduction by English literature scholar Alison Fraser and a timeline of the life and times of Jane Austen. Essential volumes for the shelves of every classic literature lover, the Chartwell Classics series includes beautifully presented works and collections from some of the most important authors in literary history. Chartwell Classics are the editions of choice for the most discerning literature buffs.

Other titles in the Chartwell Classics Series include: Complete Fiction of H.P. Lovecraft; Complete Grimm's Fairy Tales; Complete Novels of Jane Austen; Complete Sherlock Holme; Complete Tales & Poems of Edgar Allen Poe; Complete Works of William Shakespeare; Divine Comedy; Alices Adventures in Wonderland and Other Tales;The Essential Tales of H.P. Lovecraft; The Federalist Papers; The Inferno; The Call of the Wild and White Fang; Moby Dick; The Odyssey; Pride and Prejudice; The Essential Grimm's Fairy Tales; The Great Gatsby; The Secret Garden; Anne of Green Gables; The Essential Tales and Poems of Edgar Allan Poe; The Phantom of the Opera; The Communist Manifesto and Das Kapital; Republic; Frankenstein; Twenty Thousand Leagues Under the Sea; The Picture of Dorian Gray; Meditations; Wuthering Heights; Alice's Adventures in Wonderland and Through the Looking-Glass; A Tales of Two Cities; Beowulf; The Strange Case of Dr. Jekyll and Mr. Hyde and Other Stories; Adventures of Huckleberry Finn; Little Women
More books by this author More books in this series

Jane Austen was born in 1775 at Steventon, Hampshire. She was the seventh child of the local rector, and her life, by modern standards, was uneventful. In 1801 she moved with her parents to Bath but returned to Hampshire when her father died, settling in the village of Chawton. She remained there until 1817, when she moved to Winchester to be within easy reach of her doctor. She died that year, at age forty-one, and is buried in Winchester Cathedral, which also contains a plaque in honor of her memory. Four of her novels were published anonymously during her lifetime; two more, one of which was Persuasion, appeared posthumously.