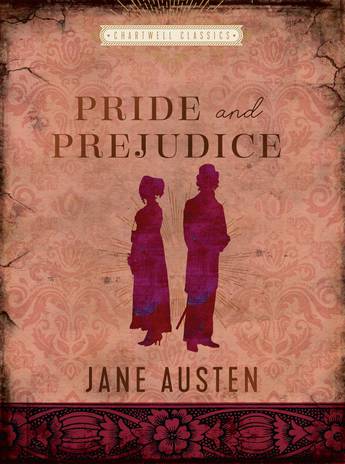 Enjoy Jane Austen's mastery of irony, dialogue, and realism in the unforgettable love story Pride and Prejudice, then share this classic piece of literature with a new generation.

When headstrong and independent Elizabeth Bennet is required to find a wealthy husband, her encounter with the arrogant Mr. Darcy leads to one of the most entertaining and satisfying courtships ever imagined. Beyond the romance, Pride and Prejudice is a book full of humor and wit that is also a commentary on upper-class social manners at the turn of the nineteenth century. Even though it is concerned with love and marriage, the novel is a rejection of Romanticism, a popular way of imagining the world at that time. Austen preferred to highlight the rational abilities of her characters and not portray them as completely controlled by their emotions. Pride and Prejudice's characters aren't robots, though. Austen shows universal situations in a perfectly clear light-embarrassment when someone is foolish, the nervous feeling of falling in love, and the chagrin caused by making a big mistake. Austen's mastery of irony, dialogue, and realism support character development and make Pride and Prejudice a pure pleasure to read.

Complete and unabridged, this elegantly designed, jacketed hardcover edition features an introduction by Victorian literature scholar Deborah Lutz and a timeline of the life and times of Jane Austen.

Other titles in the Chartwell Classics Series include: Complete Fiction of H.P. Lovecraft; Complete Grimm's Fairy Tales; Complete Novels of Jane Austen; Complete Sherlock Holme; Complete Tales & Poems of Edgar Allen Poe; Complete Works of William Shakespeare; Divine Comedy; Alices Adventures in Wonderland and Other Tales;The Essential Tales of H.P. Lovecraft; The Federalist Papers; The Inferno; The Call of the Wild and White Fang; Moby Dick; The Odyssey; The Essential Grimm's Fairy Tales; Emma; The Great Gatsby; The Secret Garden; Anne of Green Gables; The Essential Tales and Poems of Edgar Allan Poe; The Phantom of the Opera; The Communist Manifesto and Das Kapital; Republic; Frankenstein; Twenty Thousand Leagues Under the Sea; The Picture of Dorian Gray; Meditations; Wuthering Heights; Alice's Adventures in Wonderland and Through the Looking-Glass; A Tales of Two Cities; Beowulf; The Strange Case of Dr. Jekyll and Mr. Hyde and Other Stories; Adventures of Huckleberry Finn; Little Women
More books by this author

Jane Austen was born in 1775 at Steventon, Hampshire. She was the seventh child of the local rector, and her life, by modern standards, was uneventful. In 1801 she moved with her parents to Bath but returned to Hampshire when her father died, settling in the village of Chawton. She remained there until 1817, when she moved to Winchester to be within easy reach of her doctor. She died that year, at age forty-one, and is buried in Winchester Cathedral, which also contains a plaque in honor of her memory. Four of her novels were published anonymously during her lifetime; two more, one of which was Persuasion, appeared posthumously.