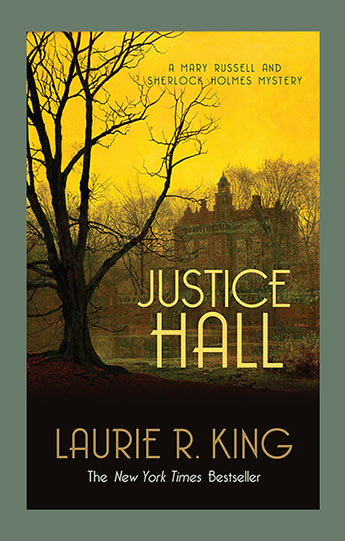 Dazzling readers and critics alike, Laurie R. King's bestselling mystery series featuring Mary Russell and her partner-in-crime Sherlock Holmes has been described by The New York Times as a 'lively adventure in the very best of intellectual company.'

Only hours after Holmes and Russell return from solving one riddle on the moor, another knocks on their front door...literally.

It's a mystery that begins during the Great War, when Gabriel Hughenfort died amidst scandalous rumours that have haunted the family ever since. But it's not until Holmes and Russell arrive at Justice Hall, a home of unearthly perfection set in a garden modelled on Paradise, that they fully understand the irony echoed in the family motto, Justicia fortitudo mea est: 'Righteousness is my strength.'

A trail of ominous clues leads Holmes and Russell from an English hamlet to fashionable Paris to the wild prairie of the New World. But as the moment of reckoning approaches, will justice be done...or have they been lured straight into an elusive killer's perfectly baited trap?
More books by this author More books in this series

Laurie R. King has been writing crime fiction since 1987 and won many awards for her work in fiction including the prestigious John Creasey Dagger, the Edgar, the Nero and Macavity Awards. Her background includes such diverse interests as Old Testament theology and construction work, and she is the author of highly praised stand-alone suspense novels and a contemporary mystery series, as well as the Mary Russell & Sherlock Holmes series. She lives in North California.