Be a Better Runner 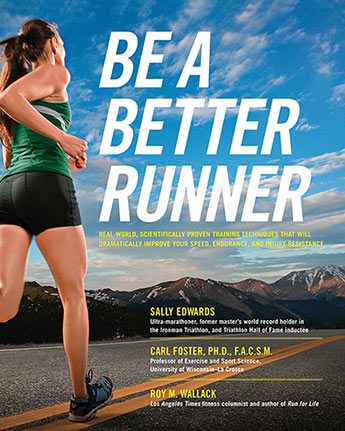 Be A Better Runner addresses every possible concern from posture and form to nutrition, footwear and race strategy.

Written by marathoner and Triathlon Hall of Fame inductee, Sally Edwards, Be A Better Runner addresses every possible concern from posture and form to nutrition, footwear and race strategy. You’ll learn how to adapt running mechanics such as stride and pacing to your body type and fitness level while specific training regimens prepare you for any type of running event including sprints, distance runs, and marathons.

Co-authored with Carl Foster, the former President of the American College of Sports Medicine, Be A Better Runner features the latest research in the science of running. You’ll learn the latest strategies to boost your performance, train more effectively, and aid post-workout recovery. The latest research on special concerns such as running after age 40, during pregnancy, overtraining in younger runners and preventing amenorrhoea in female distance runners is also highlighted.
More books by this author

Sally Edwards is a former Master's World Record holder in the Ironman Triathlon. She has competed in some of the hardest races on the planet, including the Western States 100-Mile Run which she won. A leader in the field of fitness training, Sally holds a master's in Exercise Physiology and is the creator and CEO of the Heart Zones Training System which uses heart rate data and cardiac training ranges to enhance athletic performance. A founder of the sport of triathlon (and a Triathlon Hall of Fame inductee), most of Sally's recent races have been performed in her role as the National Spokeswoman for the Danskin Triathlon Series. Carl Foster Ph.D., FACSM is the former president of the American College of Sports Medicine. He is a professor of exercise and sport science at the University of Wisconsin-La Crosse and director of the Human Performance Laboratory at UW-L. Foster is a former associate editor-in-chief of Medicine and Science in Sports and Exercise. His distinguished professional career and accomplishments have produced over 250 scientific papers, book chapters, and longer works.
Roy M. Wallack is a Los Angeles Times health and fitness columnist and former editor of Triathlete and Bicycle Guide magazines. A participant some of the world's toughest running, cycling, and multisport events, including the Boston Marathon, Badwater UltraMarathon, Eco-Challenge, La Ruta de los Conquistadores, and TransRockies Run, he finished second in the World Fitness Championship in 2004.