Home>Browse>Books>History>365 Aircraft You Must Fly

365 Aircraft You Must Fly

The most sublime, weird, and outrageous aircraft from the past 100+ years 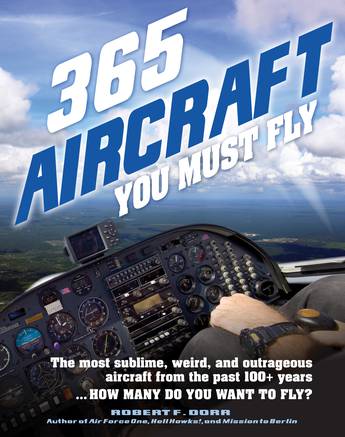 In 365 Aircraft You Must Fly, aviation expert Robert F. Dorr profiles history's most important, fascinating, and famous aircraft ever made, both military and commercial, including many that were flown during World War II.

A fascinating plane-by-plane journey through aviation history, this beautifully illustrated book covers 365 of the most iconic aircraft in world history that enthusiasts, serious-minded hobbyists, and casual fans would love to fly if given the chance. Clear photography, historical context, and specs get you as close as possible to these planes without setting foot in a hangar.

Aviation has come a long way since the Wright Brothers built their glider in Kitty Hawk, North Carolina, in 1903. From among the thousands of different types of military and commercial aircraft constructed over the past 100 years, aviation expert Robert F. Dorr profiles the most important, fascinating, and famous aircraft ever made. Your opinions might differ, but you wouldn't want to miss out on the planes Dorr identifies as flights of a lifetime. While covering every era of aviation history, many of the planes in 365 Aircraft You Must Fly were flown during World War II, a time unmatched in aviation for its technological advances, romance, and clarity of purpose. During this golden age of flying, propellers gave way to jet engines, and the "Greatest Generation" fought gallantly in them.

Explore the history, thrills, and joy of flying the world's most amazing 365 aircraft.
More books by this author

Robert F. Dorr was an air force veteran and a retired senior Foreign Service officer who published 70 books and thousands of magazine articles about the air force, aviation, and military affairs. He wrote a weekly opinion column for Air Force Times, monthly columns for Combat Aircraft, Air International, and Aerospace America magazines, and a quarterly column for Air Power History, which he helped create. He was the author of Mission to Berlin, Mission to Tokyo, Hell Hawks!, Fighting Hitlers Jets, and Air Force One.