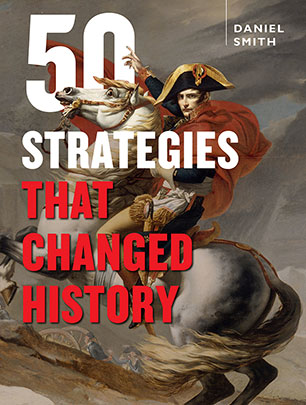 The greatest strategies ever developed for war, business, and politics.

How did David, the future king of Israel, plot his assault against the seemingly invincible Philistine warrior Goliath? What strategic thinking lay behind the military triumphs of Alexander the Great or Napoleon Bonaparte? When revolutionaries organized to bring about the downfall of the autocratic Russian tsar, what keen intelligence laid the groundwork for their achievement? Study the social media, as well as political, strategy that lay behind Barack Obama's historic election as US President in 2008-and his re-election four years later. Investigate the bold moves, the cunning, and the hard-hitting plans of action that brought triumph to economic giants such as Henry Ford or Bill Gates. Consider how the great strategists of each age learnt from their forerunners as this most practically focused field of thought developed and changed.

In this thoroughly researched, superbly illustrated, and expertly written book the history of strategic thought comes vividly and immediately to life through stories of 19 military, 14 political, and 17 business geniuses, exploring how strategy has changed our world for better and for worse, and influenced every part of our daily lives.
More books by this author

Daniel Smith is a writer, editor, and researcher of non-fiction. His previous books include How to Think Like Steve Jobs, Go Figure, How to Think Like Sherlock, Is Their Alot Wrong With This Centence?, The Language of London, and Think You Know it All? Daniel is also a long-time contributor to The Statesman's Yearbook, an annual geopolitical guide to the countries of the world.