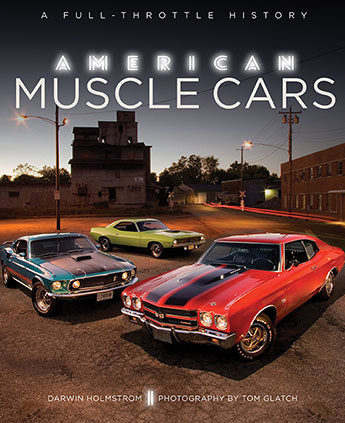 Download cover
Availability: Temporarily unavailable from this website, please try another retailer
This is the muscle car history to own--a richly illustrated chronicle of America's greatest high-performance cars, told from their 1960s beginning through the present day!

In the 1960s, three incendiary ingredients--developing V-8 engine technology, a culture consumed by the need for speed, and 75 million baby boomers entering the auto market-- exploded in the form of the factory muscle car. The resulting vehicles, brutal machines unlike any the world had seen before or will ever see again, defined the sex, drugs, and rock 'n' roll generation.

American Muscle Cars chronicles this tumultuous period of American history through the primary tool Americans use to define themselves: their automobiles. From the street- racing hot rod culture that emerged following World War II through the new breed of muscle cars still emerging from Detroit today, this book brings to life the history of the American muscle car.

When Pontiac's chief engineer, John Z. DeLorean, and his team bolted a big-inch engine into the division's intermediate chassis, they immediately invented the classic muscle car. In those 20 minutes it took Bill Collins and Russ Gee to bolt a 389 ci V-8 engine into a Tempest chassis they created the prototype for Pontiac's GTO--and changed the course of automotive history. From that moment on, American performance cars would never be the same.

American Muscle Cars tells the story of the most desirable cars ever to come out of Detroit. It's a story of flat-out insanity told at full throttle and illustrated with beautiful photography.
More books by this author

Darwin Holmstrom has written, co-written, or contributed to over thirty books on subjects ranging from motorcycles and muscle cars to Gibson Les Paul guitars, including Indian Motorcycles, GTO: Fifty Years, Let's Ride: Sonny Barger's Guide to Motorcyclying,Top Muscle: The Rarest Cars from America's Fastest Decade, BMW Motorcycles, The Harley-Davidson Motor Co. Archive Collection, and The Complete Idiot's Guide to Motorcycles. Darwin is the senior editor for Motorbooks. Prior to that he served as Midwestern editor for Motorcyclist magazine.Since 1983, Tom Glatch has contributed hundreds of stories and photographs to major collector, Corvette, Mustang, muscle car, and Mopar magazines. Tom grew up during the muscle car era, and his first car was a very quick 1970 Plymouth Duster 340. Tom and his wife Kelly have contributed photographs to books by other Motorbooks authors, as well as Motorbooks' Corvette calendars. When not pursuing old muscle cars, Tom works for a Fortune 500 corporation as a data and systems analyst and developer. He lives in southeastern Wisconsin with his wife and two children, daughter Keara and son Sean.