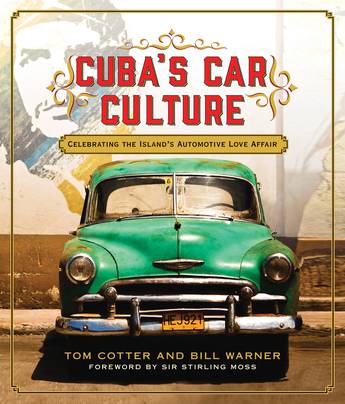 Cuba's Car Culture presents readers with Cuba's unique car culture, which harks back to the vintage rides of the 1950s and earlier. The book includes history, photos, and automotive commentary from experts.

The story of how Cuba came to be trapped in automotive time is a fascinating one. For decades, the island country had enjoyed healthy tourism trade and American outpost status, and by the 1950s it had the highest per capita automotive purchasing of any Latin American country - its middle class ensured an interesting variety of vehicles plying the roads. But when Cuba fell to communist rebels in 1959, so ended the inflow of new cars. Since then, trade embargo forced Cuba's car enthusiasts to develop a unique and insular culture, one marked by great creativity, such as:

Keeping a car alive with no opportunity to acquire replacement parts

Customizing a car with no access to aftermarket parts

Drag racing with no drag strip

In many ways, Cuba is an automotive time warp, where the newest car is a 1959 Chevy or perhaps one of the Soviet Ladas. Cuba's Car Culture offers an inside look at a unique car culture, populated with cars that have been cut off from the world so long that they've morphed into something else in the spirit of automotive survival.

Authors Tom Cotter and Bill Warner (founder of the Amelia Island Concours) take readers of Cuba's Car Culture on a whirlwind tour of all things automotive, beginning with Cuba's pre-Castro car and racing history and bringing us up to today's lost collector cars, street racing, and the challenges of keeping decades-old cars on the road. The book is illustrated throughout with rare historical photos as well as contemporary photos of Cuba's current car scene. For anyone who enjoys classic cars, from old Chevy Bel-Airs to Studebakers to Ford Fairlanes, a cruise around Cuba will make you feel like a kid in a candy store.
More books by this author

The title on Tom Cotter's business card reads: Certified Car Geek. For the past 30 years, Cotter has worked on nearly every end of the car business: mechanic, car sales, automotive public relations and marketing executive, auto racing authority, historian, racer, collector, restorer, journalist, and author. He has authored 10 automotive books, including most of the popular In the Barn series for Motorbooks. He has written for the New York Times and Road & Track magazine. Whenever he sits down at his keyboard to write another book, you can be sure that he has grease under his fingernails. Official Website: www.cobrainthebarn.comBill Warner is founder of the Amelia Island Concours and also serves as president of his own business, H. C. Warner, Inc., an industrial filtration company. He also owns and operates Bill Warner Racing. Warner won the 2002 Meguiar's Award for Collector Car Hobby Person of the Year. Warner began as a go-fer for a racing team as a teenager and eventually began racing his own cars, competing in a variety of events. His writing and photography have been featured in Road & Track, as well as several European and Asian racing publications.