Flights of No Return 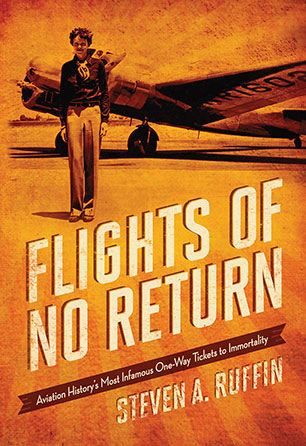 Discover the mysterious, controversial, and sometimes downright eerie history of flights that didn't end as planned.

The history of aviation is full of accounts of history's most spectacular flights. But what about the ones from which someone failed to return?

A celebrated millionaire - who also happened to be the world's foremost aviator - lifted off in a small plane one clear morning in 2007 and disappeared.

The glamorous son of a beloved fallen president took off on a hazy summer night in 1999 and plunged himself and two others into the Atlantic Ocean.

A US Navy blimp landed one Sunday morning in 1942 in the middle of a city street in California with no one aboard.

Some of these 'non-returns' occurred because of errors in judgment; others were intentional, and some resulted from causes still unknown. Get the full, meticulous account of the fascinating people involved in these flights, the mistakes they made, and the ways in which their 'flight of no return' affected the world. Pilot and aviation writer Steven A. Ruffin covers the entire 230-year span of manned flight in all types of aircraft through war and peace. Balloons, blimps, biplanes, jets, and spaceships have all suffered mishaps over the years.

Don't miss the mystery, adventure, intrigue, and a sprinkling of the supernatural and extraterrestrial in Flights of No Return.

Steven A. Ruffin is an aviation writer and pilot with a lifelong interest in the history of flight. He served for four years as managing editor of the World War I aviation journal Over the Front and is an eight- time winner of the League of World War I Aviation Historians' Hooper Award for writing and editorial excellence. In 2005, Steve published his first book, Aviation's Most Wanted: The Top 10 Book of Winged Wonders, Lucky Landings, and Other Aerial Oddities, later distributed internationally under the title Top Fun. Steve has been a licensed pilot since 1972 and has owned and flown both vintage and experimental aircraft. He is a longtime member of the Experimental Aircraft Association (EAA) and after serving in the US military for 24 years, he retired in 2003 as a colonel in the US Air Force. He currently lives in Virginia Beach, Virginia.