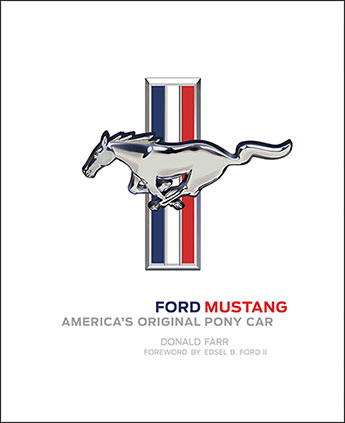 Come along on Mustang's wild ride to automotive success.

In the early 1960s, Lee Iacocca - then director of the Ford division at Ford Motor Company - convinced Henry Ford II to produce a sporty four-seat car aimed at the emerging youth market. That car, essentially a reconfigured and re-skinned Falcon economy car, became the Ford Mustang, and it changed the automotive world like no other car before or since. In Ford Mustang: America's Original Pony Car, acclaimed Mustang writer Donald Farr celebrates this unbroken lineage of muscle. He chronicles the car's phenomenal first-year sales, the new pony car category it pioneered, and subsequent models that include the Mustang GT, Shelby GT350, Shelby GT500, Super Cobra Jet, Boss 302, and Boss 429 - all part of a line of American performance cars that continues to this day. Created in cooperation with Ford Motor Company and featuring some 400 photos from its historic and media archives, Ford Mustang is a must on the bookshelf of any muscle car or Ford aficionado.
More books by this author

As editor of Mustang Monthly magazine, Donald Farr has been researching and writing about Mustangs for over 30 years. In addition to his magazine work, Farr authored Mustang Boss 302: Ford's Trans-Am Pony Car and co-wrote How to Restore Your Mustang and the Mustang Recognition Guide with Mustang Monthly founder Larry Dobbs. Farr was inducted into the Mustang Hall of Fame in 2012.