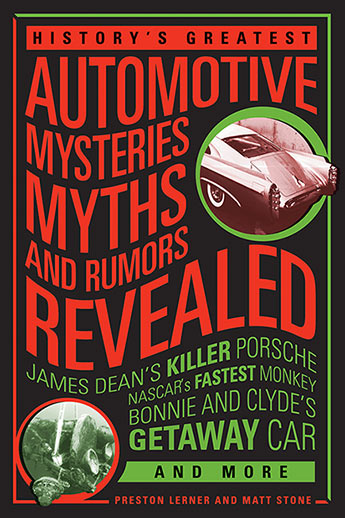 Download cover
Availability: Not available to order from this website, please try another retailer
All of the weird, wonderful, and amazing tales of cars and the characters who drove them.The automotive world is filled with crazy stories, mysteries, myths, rumors, and legends. Here are just a few covered in History's Greatest Automotive Mysteries, Myths, and Rumors Revealed.- After James Dean's death behind the wheel, parts of his car were sold off -- and cursed their subsequent owners.- Bonnie and Clyde almost exclusively stole Ford V8s as their getaway cars because they were the fastest cars of their day. Clyde Barrow even wrote Henry Ford a thank-you note for his unsuspecting help.- Peanuts in the shell are considered bad luck at NASCAR races.- James Brown's wife once claimed diplomatic immunity when fighting a traffic ticket because her husband was the ambassador of soul.- Harry Houdini learned to drive late in life only because he needed to get to an airport for a stunt, and it was the only drive he ever made.- There is a myth of a 200-miles-per-gallon carburetor that oil companies and auto manufacturers are rumored to have kept hidden from the public.- A mechanic working in a car's trunk was once mistaken for a kidnapping victim.History's Greatest Automotive Mysteries, Myths, and Rumors Revealed covers every aspect of the intersection between people and their machines. The racing, manufacturing, crime, pop culture, and mechanical lives of cars are explained, along with the shockingly poor judgment of some human characters. Separate the fact from the fiction and learn where the truth lies!
More books by this author