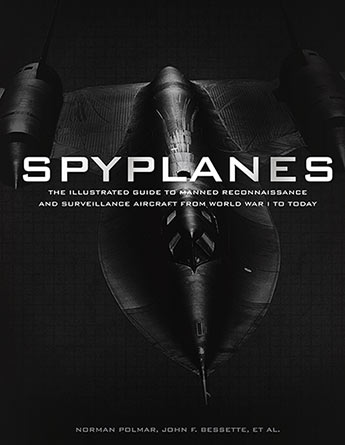 Spyplanes is a comprehensive illustrated history of manned spyplanes. Nearly seventy-five aircraft from eight nations are profiled, pictured, and accompanied by technical specifications.

A comprehensive history with descriptions of the world's most significant aircraft employed as eyes in the sky.

For almost as long as there has been sustained heavier-than-air human flight, airplanes have been used to help gather information about our adversaries. Less than a decade after the Wright Brothers flew at Kitty Hawk, Italian pilots were keeping tabs on Turkish foes in North Africa. Today, aircraft with specialized designs and sensory equipment still cruise the skies over foreign lands and seas, trying to spy out secrets.

Spyplanes is the comprehensive history of manned spyplanes, beginning with those Italian airplanes puttering above the North African desert and continuing through every major world conflict to culminate with jets cruising at supersonic speeds 85,000 feet above the Earth's surface. Nearly seventy-five aircraft from eight nations are profiled, pictured, and accompanied by a specification box. Included are purpose-built spyplanes, as well as legendary fighters and bombers that have been retrofitted for the purpose over the years. In addition, the authors feature preliminary chapters discussing the history of aerial surveillance and a host of sidebars that explore considerations such as spyplanes in military doctrine, events such as the Cuban missile crisis, the downing of Francis Gary Powers' U-2, the 1992 Open Skies Treaty, and the USAF's current Big Safari program. Spyplanes also expands beyond fixed-wing planes to include notable helicopters that have been outfitted for recon and surveillance.

From prop-driven to jet-powered aircraft, this is the ultimate history and reference source to those eyes in the skies that have added mind-bending technologies, as well as an element of intrigue, to military aviation for more than a century.
More books by this author

Norman Polmar is an author and historian specializing in the naval, aviation, and intelligence fields. He has written or coauthored more than fifty books, including Spyplane: The U-2 History Declassified (2001) and, with John Gresham, DEFCON-2: Standing on the Brink of Nuclear War During the Cuban Missile Crisis (2006; foreword by Tom Clancy). The latter was the basis of the Discovery Channel film DEFCON-2, in which Tom Clancy did the opening and closing scenes. Mr. Polmar also has written about aircraft in other books and was author of nine editions of the reference work Ships and Aircraft of the U.S. Fleet and four editions of Guide to the Soviet Navy. He writes a column on historic naval aircraft for Naval History magazine and is a columnist for the US Naval Institute Proceedings.Lieutenant Colonel John Bessette, US Air Force (Ret), is a veteran Air Force navigator and intelligence officer who flew in various combat aircraft during the Cold War. For three years he flew as navigator in C-97G cargo aircraft configured for spy missions over East Germany and the Baltic region. From May 1968 to August 1969 he was assigned to the 3rd Special Operations Squadron at Bien Hoa Air Base, Vietnam, where he flew more than 1,200 hours as a navigator in AC-47 Spooky gunships. A three-year assignment in the Defense Intelligence Agency (DIA) followed, supporting the Joint Chiefs of Staff's Joint Reconnaissance Center (JRC) with assessments on the military and political risks of reconnaissance missions worldwide and the anticipated intelligence gain from them. He subsequently served in NATO air intelligence positions, retired from the Air Force in 1979, and after a year, rejoined DIA as an intelligence analyst specializing in the Soviet and Warsaw Pact air forces. He retired from DIA in 1996 to begin a third career as a researcher and author.