The Women Who Changed Country Australia 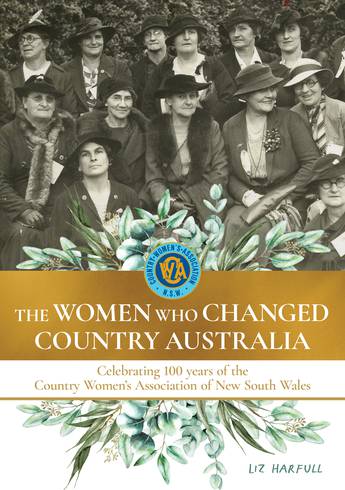 A compelling and thoroughly researched account of the CWA of NSW - its beginnings, its remarkable achievements and the indomitable women who have driven each one of its many successes.

In 1922 a group of determined women from both the city and the country joined forces to change the lives of Australian families in the bush. Many had found their voices campaigning for the right to vote. Now they had no intention of sitting quietly at home while women and children suffered and died in their thousands from preventable causes.

One hundred years on, the iconic Country Women's Association is famous for making scones, stitching handicrafts and raising money for worthy causes. But there is so much more to this national treasure.

Refusing to give up or sit back and wait for governments to act, the CWA has always taken a forthright approach to getting things done. And, despite its conservative reputation, it has often pursued radical agendas ahead of their time.

In the 1920s the CWA built hospitals and baby health clinics. In the 1930s it worked to save the Australian wool industry and encouraged women to take an interest in international affairs. During the Second World War it became a household name for reliability in a crisis. In the 1950s it set up branches in Aboriginal communities. A decade later it challenged public perceptions of mental illness. During the early 2000s it protested against new coal mines.

In The Women Who Changed Country Australia best-selling author Liz Harfull reveals how the CWA struggled into existence, beset by clashing personalities and moments of high drama. In fitting tribute, it celebrates the CWA's astonishing achievements and the remarkable women who have led it, while coping with their own personal tragedies.

Along the way, generations of grassroots members created what one prime minister described as a 'power in the land'. And they're not done yet!

Best-selling author Liz Harfull is passionate about telling the stories and unearthing the histories of the extraordinary everyday people who make up our communities, especially in rural and regional Australia. An award-winning journalist and rural communicator, she grew up on a farm near Mount Gambier which has been in her family since the 1860s.

Liz walked away from a successful career in public relations to become an author. Since then, she has written two international award-winning books about Australian home cooks and show cooking traditions - The Australian Blue Ribbon Cookbook and Tried, Tested and True - and two books capturing the life stories of rural women, including national bestseller Women of the Land, and City Girl, Country Girl, which was inspired by her mother.

Liz became aware of the CWA as a young reporter, assigned to cover meetings and competitions in her local community. In Tried, Tested and True, she championed their treasured cookbooks and uncovered the stories of the women who created them, giving her a taste for the fascinating history of this iconic organisation.

Today Liz lives in the Adelaide Hills, occasionally finding time to bake scones and make jam, while juggling a busy writing career and volunteer work as a community historian.