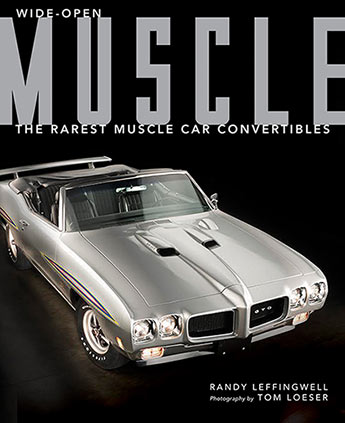 The fully illustrated book Wide-Open Muscle celebrates the muscle-car convertibles -- the most expensive muscle cars from the classic era of the 60s and 70s.

Climb inside these stunning muscle car drop-tops, straight from the classic era of American high-performance cars!

Today's rarest, priciest, and most highly sought-after muscle cars are also the least practical. These are the striking convertibles of the 1960s and 1970s that were optioned out for drag racing. Wide-Open Muscle showcases these rare cars and proves that sometimes it pays to throw practicality out the window in order to make something purely cool and fun to drive.

At the peak of drag racing popularity, it was common knowledge that racers needed the lightest, most rigid-framed cars available. Convertibles represent the exact opposite of that description, so it's amazing that these drop tops ever emerged amid the circle of full-throttle dragsters. While typical convertible drivers cruised around listening to the latest Lovin' Spoonful release in the eight-track tape deck, these muscle-car convertibles were equipped for rock 'n' roll speed. These topless muscle cars are so rare because few people had the dedication (or money) to buy a vehicle this impractical. They're valuable because they represent the absolute extreme of the entire muscle-car genre.

Wide-Open Muscle celebrates these rare and fantastic cars in studio portraits using the light-painting process perfected by author Randy Leffingwell and photographer Tom Loeser. It is the ultimate portrayal of the ultimate muscle cars.
More books by this author

Randy Leffingwell wrote his first book, American Muscle, in 1989 while still on staff at the Los Angeles Times. Since then, he has authored another 47 titles for Motorbooks and its sister publisher Voyageur Press, including Porsche 911 50 Years, Corvette 60 Years, and The Art of the Corvette. Leffingwell is considered one of the top Porsche historians working today, and he enjoys a close working relationship with Porsche AG. He lives in southern California, about 100 miles north of Los Angeles.