Home>Browse>Books>History>Wreck of the Whale Ship Essex: The Complete Illustrated Edition

Wreck of the Whale Ship Essex: The Complete Illustrated Edition

The Extraordinary and Distressing Memoir That Inspired Herman Melville's Moby-Dick 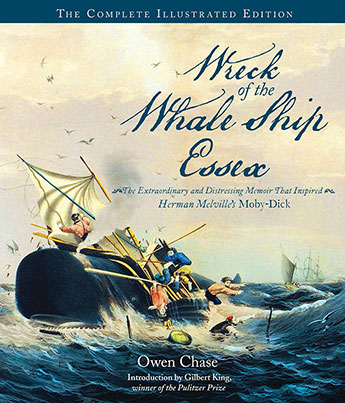 The Extraordinary and distressing memoir that inspired Herman Melville's Moby-Dick.

Read Owen Chase's memoir which inspired Moby-Dick and In the Heart of the Sea, the major motion picture from Ron Howard, which will be released March 2015.Owen Chase was the first mate on the ill-fated American whaling ship Essex, which was attacked and sunk by a sperm whale in the southern Pacific Ocean in 1820. The crew spent months at sea in leaking boats and endured the blazing sun, attacks by killer whales, and lack of food. The men were forced to resort to cannibalism before the final eight survivors were rescued. Herman Melville based his 1851 novel, Moby-Dick, on the sinking.Chase recorded the tale of the ship's sinking and the following events with harrowing clarity in the Wreck of the Whale Ship Essex.I turned around and saw him about one hundred rods [500 m or 550 yards] directly ahead of us, coming down with twice his ordinary speed of around 24 knots (44 km/h), and it appeared with tenfold fury and vengeance in his aspect. The surf flew in all directions about him with the continual violent thrashing of his tail. His head about half out of the water, and in that way he came upon us, and again struck the ship. - Owen Chase.Filled with art, photographs, maps, and artifacts, this is a richly illustrated edition of Chase's memoir, augmented with memoirs of other participants, as well as the perspectives of historians, contemporary and modern.
More books by this author

Owen Chase was first mate of the whale ship Essex, which was struck and sunk by asperm whale on November 20, 1820. Chase wrote about the incident in Narrative of the Most Extraordinary and Distressing Shipwreck of the Whale-Ship Essex. This book, published in 1821, inspired Herman Melville to write Moby-Dick.Gilbert Anthony King is an American writer and photographer who won the Pulitzer Prize for his book, Devil in the Grove: Thurgood Marshall, the Groveland Boys, and the Dawn of a New America (2012). He is also the author of The Execution of Willie Francis: Race, Murder, and the Search for Justice in the American South and has written for newspaper such as The New York Times and The Washington Post.