Home>Browse>Books>History>Wreck of the Whale Ship Essex: The Complete Illustrated edition

Wreck of the Whale Ship Essex: The Complete Illustrated edition 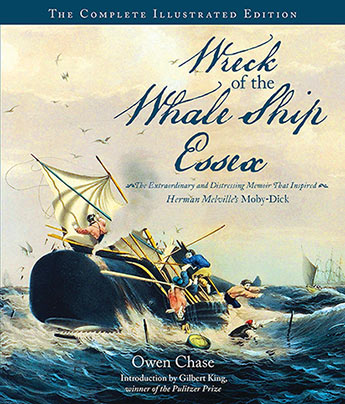 Relive the tragic tale of the sinking of the Whale Ship Essex in this illustrated edition of this classic American memoir, the story that inspired Herman Melville's Moby-Dick.

Owen Chase was the first mate on the ill-fated American whaling ship Essex, which was attacked and sunk by a sperm whale in the southern Pacific Ocean in 1820.
The crew spent months at sea in leaking boats and endured the blazing sun, attacks by killer whales, and lack of food. The men were forced to resort to cannibalism before the final eight survivors were rescued. Herman Melville based his 1851 novel, Moby-Dick, on this sinking.
Chase recorded the tale of the ship's sinking and the following events with harrowing clarity in the Wreck of the Whale Ship Essex:
'I turned around and saw him about one hundred rods [500 m or 550 yards] directly ahead of us, coming down with twice his ordinary speed of around 24 knots (44 km/h), and it appeared with tenfold fury and vengeance in his aspect. The surf flew in all directions about him with the continual violent thrashing of his tail. His head about half out of the water, and in that way he came upon us, and again struck the ship.'
Filled throughout with period and contemporary art, photographs, maps, and artefacts, this is a beautifully illustrated edition of a classic American memoir, augmented with the writings of other participants, as well as the perspectives of period and contemporary historians
More books by this author

Owen Chase was the first mate on the ill-fated American whaling ship Essex, which was attacked and sunk by a whale in the southern Pacific Ocean in 1820. For over ninety days the twenty man crew drifted along in three separate boats. During that time the surviving crew ate five dead men and then drew straws, wherein seven crew members were cannibalised. Chase was one of the eight surviving crew members and wrote a classic memoir, which inspired Herman Melville to begin work on his masterpiece,
Moby-Dick. This edition is a paperback reissue of the first fully illustrated account of Chase's story and is beautifully filled with period and contemporary art, photographs, maps, and artefacts, as well as the memoirs of Thomas Nickerson, another survivor, as well as contemporary and modern perspectives of this monumental event.