The 50 most important achievements of a timeless civilization, each explained in half a minute 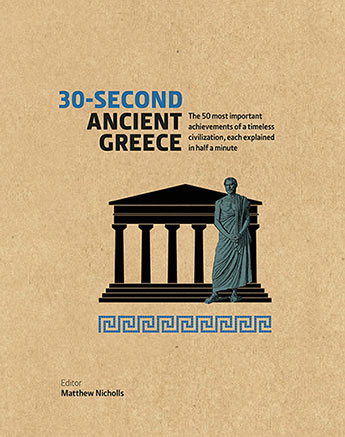 Ancient Greek civilization laid the foundations for so many aspects of modern western life, from architecture to philosophy. But can you recite the Classical orders with confidence (are you sure what an order actually is?), and would you be able to define the key contributions of Socrates, Plato, and Aristotle?
More books by this author

Dr Matthew Nicholls (Reading, UK) read Classics at St John's College Oxford, where he completed his DPhil. He moved on to a junior research fellowship at The Queen's College before taking up a lectureship at the University of Reading, where he is now an associate professor of ancient history. His research interests include books and libraries in the ancient world, from Alexandria and Pergamum in the Greek east to Rome in the west, and he has recently published extensively on a newly discovered text by the Greek medical writer Galen. His other interests include the digital reconstruction of ancient buildings and cities, and travel in the Greco-Roman world.