The Secret Life of Farts 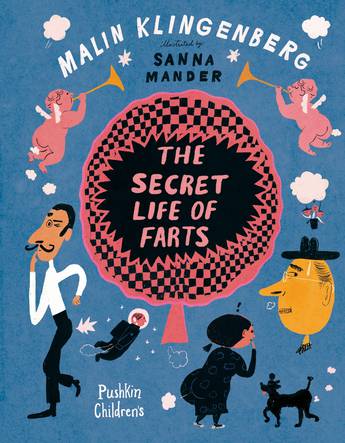 A hilarious journey around the hidden world of the fart.

Hilarious verses and outrageous illustrations combine to produce a book about the funniest thing in the world: farts! From the racetrack to the concert hall, from humble bank-robbers to esteemed royals, farts are produced everywhere and by everyone. The Secret Life of Farts is your guide to the rich, colourful, flatulatory world that is all around us.
More books by this author

Malin Klingenberg is a Swedish-speaking author from Finland who has so far written five books of The Senior Squad series: Patrik and The Senior Squad (2010), Irene and the Moneyhoover (2013), Fake Bernice (2015), The Fantastic Alfredo (2016) and Rakel's Miracles (2017). The Fantastic Alfredo was awarded with Runeberg Junior Prize in 2017. The sixth book will come out in 2020. In 2018 Klingenberg published her first young adult title, Elk Girl, that has received wide critical acclaim.

Arguably one of Finland's most prolific illustrators working today, Sanna Mander's cheerful work evokes catalogues and editorial illustration of the 1960s with a contemporary twist. With that in mind, her illustrations can be applied to an enormous variety of products, packaging design, posters, editorial illustrations and textiles. In 2006 she won Cannes Young Creatives and was awarded Junior of the year in 2007 at the Finnish Best of the Year advertising and design competition. Inspired by the luscious flora and fauna surrounding her in her native Finland, Sanna's images are mixed media odes to the unpredictable, cluttered joys of the world around her.