The Voyages of Captain James Cook 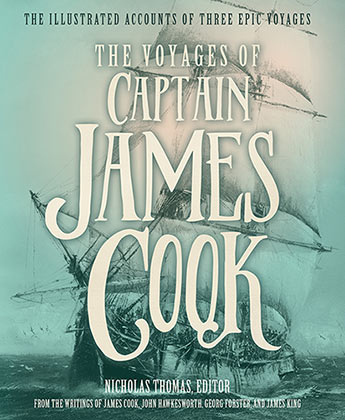 This book reveals the epic eighteenth-century voyages of Captain James Cook and his crew, beautifully illustrated through excerpts from Cook's journals, illustrations, photography, and more.

This is history's greatest adventure story. In 1766, the Royal Society chose prodigal mapmaker and navigator James Cook to lead a South Pacific voyage. His orders were to chart the path of Venus across the sun. That task completed, his ship, the HMS Endeavour, continued to comb the southern hemisphere for the imagined continent Terra Australis. The voyage lasted from 1768 to 1771, and upon Cook's return to London, his journaled accounts of the expedition made him a celebrity. After that came two more voyages for Cook and his crew, followed by Cook's untimely murder by natives in Hawaii. The Voyages of Captain James Cook reveals Cook's fascinating story through excerpts from his journals, as well as illustrations, photography, and supplementary writings.During Cook's career, he logged more than 200,000 miles - nearly the distance to the moon. And along the way, scientists and artists traveling with him documented exotic flora and fauna, untouched landscapes, indigenous peoples, and much more. In addition to the South Pacific, Cook's voyages took him to South America, Antarctica, New Zealand, the Pacific Coast from California to Alaska, the Arctic Circle, Siberia, the East Indies, and the Indian Ocean. When he set out in 1768, more than one-third of the globe was unmapped. By the time Cook died in 1779, he had created charts so accurate that some were used into the 1990s.

The Voyages of Captain James Cook is a handsome illustrated edition of Cook's selected writings spanning his Pacific voyages, ending in 1779 with the delivery of his salted scalp and hands to his surviving crewmembers. It's bound to enthrall anyone who appreciates history, science, art, and classic adventure.
More books by this author

James Cook (1728-1779) was a British explorer, mapmaker, and navy captain. His three voyages to the South Pacific resulted in the mapping of previously uncharted lands. His voyages were also renowned for their scientific discoveries and for Cook's own extraordinary leadership skills.John Hawkesworth (c. 1715-1773) was an English publisher and writer commissioned to edit the papers from Cook's first voyage. His accounts of the manners and customs of the cultures Cook encountered caused a sensation in England, and the backlash is rumored to have hastened his death.Nicholas Thomas, director of the Museum of Archaeology and Anthropogy at Cambridge since 2006, is an anthropologist and historian. He visited the Pacific Islands first in 1984 to research his PhD thesis on the Marquesas Islands and later worked in Fiji and New Zealand, as well as in many archives and museum collections in Europe, North America, and the Pacific itself. His books include Discoveries: The Voyages of Captain Cook (2003) and Islanders: The Pacific in the Age of Empire (2010), which was awarded the Wolfson History Prize.