365 Sports Cars You Must Drive 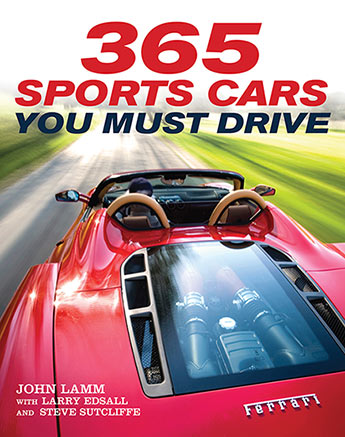 Download cover
Availability: Out of print
Sports cars make up one of the most beloved automotive genres for car fans. From towering icons like Ferrari, Lamborghini, Porsche, and Corvette to everyman sportsters from Triumph, MG, Sunbeam, and Miata to oddballs like Crosley, Sabra, and DB, sports cars inspire passion and strong opinions as few other vehicles on the road could. This book, 365 Sports Cars You Must Drive, provides capsule overviews and fun facts about the greatest, oddest, most beautiful, and most ill-considered sports cars of all time. How many have you driven, dreamed about, or shuddered at the thought of?
More books by this author

Larry Edsall was snatched away from a career as the sports editor of a daily newspaper in Michigan to become the motorsports editor at AutoWeek magazine, where he spent most of a dozen years as the managing editor. He left Detroit for Phoenix in 1999 to help modernize one automotive website and then launched another, iZoom.com. He is a freelance contributor to automotive and lifestyle publications, writes regularly for the Detroit News Drive section, contributes to the New York Times Wheels, and is part of the adjunct faculty at the journalism school at Arizona State University. He resides in Phoenix, Arizona.John Lamm is a respected, long-time automotive journalist and photographer who covers sports and racing cars for Road & Track. After attending a road race at Elkhart Lake, Wisconsin, he decided to become an automotive journalist and began his career with Motor Trend magazine in Los Angeles. In 1975, he moved to Road & Track, where he remains editor-at-large to this day. Lamm has won the International Motor Press Association s Ken Purdy Award and the Motor Press Guild s Dean Batchelor Award for his writing and has also been honored for his photography. www.johnlammphotography.com Larry Edsall was snatched away from a career as a daily newspaper sports editor to become motorsports editor at AutoWeek magazine. Before long, he was its automotive industry news and motorsports editor, and for most of his 12 years he served as the magazine s managing editor. Edsall left Detroit for Phoenix in 1999 to help modernize one automotive website then launched another, www.iZoom.com. He is a freelance contributor to several automotive and lifestyle publications. Award-winning writer and video presenter Steve Sutcliffe has been working in automotive journalism for more than 20 years, and is the editor-at-large for Autocar magazine, the UK's oldest, most-respected, and biggest-selling weekly automotive publication. His work has appeared in numerous newspapers and periodicals, including the Guardian, Sunday Times, Stuff, Motorsport, and Classic and Sports Car. A race driver of some repute, he competed in the British Touring Car Championship for Lexus in 2001, and in the TVR Tuscan Challenge from 1998--2000, and has driven many of the cars profiled in 365 Sports Cars You Must Drive. He lives in Hove, East Sussex, UK.As a respected automotive journalist and photographer covering high-performance cars for Road & Track since 1975, author and photographer John Lamm has worked with and interviewed nearly every significant figure in Ferrari history. Lamm’s work has won numerous awards including the International Motor Press Association’s Ken Purdy award and the Motor Press Guild’s Dean Batchelor prize. This is his 11th book. Lamm lives in San Clemente, California, with his wife Scheri.