The Inside Story of Maranello's Fastest, Rarest Road Cars 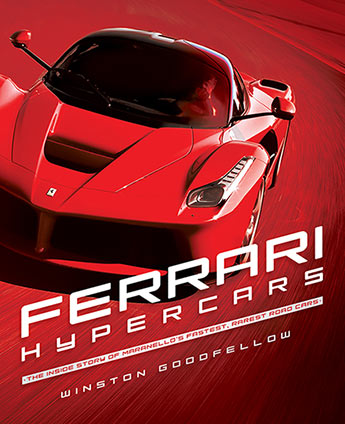 Download cover
Availability: Temporarily unavailable from this website, please try another retailer
This landmark book is the result of numerous interviews with many of the greatest names in Ferrari history over a number of decades, and is loaded with stories and photos never before seen in print. While most everyone thinks the Ferrari supercar/hypercar began with the 288 GTO, the first such model was the mighty 375 MM in the 1950s. Atmospheric art and flowing insightful text brilliantly weave through the subsequent decades, taking the reader behind the scenes into the factory, design studios, auto shows, and on to the road and track, all the way up to today's mind-boggling $1.5 million 950 horsepower LaFerrari. Meet the men behind the cars, and what they saw behind closed doors. Find out how a chance encounter with a BMW 3 Series and not Group B was the real flashpoint for the birth of the 288 GTO, Sergio Pininfarina's remark that caused the Enzo's radical shape to become the final design, why 1966's radical 365 P was fitted with central steering decades before McLaren's F1, the role Porsche's 959 had in the creation of the F40, first hand insights on the early (and trying) years of the Sergio Pininfarina-Enzo Ferrari relationship, and much more.Richly illustrated on lustrous glossy paper with evocative period imagery and stunning contemporary photography of the cars, the factory, design studios and the creators, this book is part art, part thriller, and all history. This insightful, approachable treatise will appeal to every auto enthusiast and Ferrari fan.
More books by this author

Winston Goodfellow is one of the world's leading experts on gran turismo cars, especially those from Italy. His words and photos have appeared in more than 50 magazines in several countries. He is the author of first edition of Isorivolta: The Men, The Machines and the highly acclaimed Italian Sports Cars. He finds the people who lived the story, and gets them to talk about what happened behind the scenes, placing their recollections in the context of the time. Since 1989, he has been a Chief Class Judge at the famous Pebble Beach Concours d'Elegance, and is a member of its advisory board. He lives in California and is often in Italy, photographing cars or talking with the people who are its automotive history.