The Life and Wars of Clementine Churchill 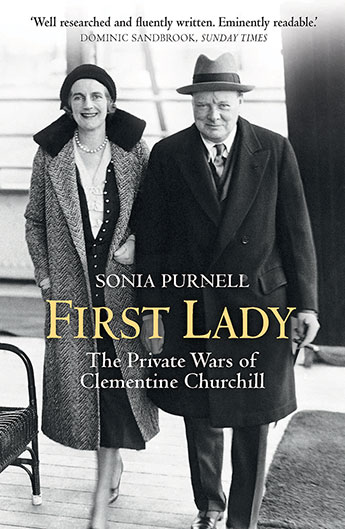 Without Churchill's inspiring leadership Britain could not have survived its darkest hour and repelled the Nazi menace. Without his wife Clementine, however, he might never have become Prime Minister. By his own admission, the Second World War would have been 'impossible without her'.

From the personal and political upheavals of the Great War, through the Churchills' 'wilderness years' in the 1930s, to Clementine's desperate efforts to preserve her husband's health during the struggle against Hitler, this is the inspiring but often ignored story of one of the most important women in modern history.

Without Churchill's inspiring leadership Britain could not have survived its darkest hour and repelled the Nazi menace. Without his wife Clementine, however, he might never have become Prime Minister. By his own admission, the Second World War would have been 'impossible without her'. Clementine was Winston's emotional rock and his most trusted confidante; not only was she involved in some of the most crucial decisions of war, but she exerted an influence over her husband and the Government that would appear scandalous to modern eyes. Yet her ability to charm Britain's allies and her humanitarian efforts on the Home Front earned her deep respect, both behind closed doors in Whitehall and among the population at large.

That Clementine should become Britain's 'First Lady' was by no means pre-ordained. Born into impecunious aristocracy, her childhood was far from gilded. Her mother was a serial adulteress and gambler, who spent many years uprooting her children to escape the clutches of their erstwhile father, and by the time Clementine entered polite society she had become the target of cruel snobbery and rumours about her parentage. In Winston, however, she discovered a partner as emotionally insecure as herself, and in his career she found her mission. Her dedication to his cause may have had tragic consequences for their children, but theirs was a marriage that changed the course of history. Now, acclaimed biographer Sonia Purnell explores the peculiar dynamics of this fascinating union.
More books by this author

SONIA PURNELL started work at The Economist Intelligence Unit, edited a weekly financial magazine when only twenty-five, and then went on to a senior position on the Daily Telegraph's City pages before reporting on the EU from Brussels. On her return to London she assumed the position of Whitehall Correspondent, before moving to the Daily Mail, where she was Whitehall Editor. Her first book, Just Boris: A Tale of Blond Ambition, was a candid and widely acclaimed portrait of London Mayor Boris Johnson, informed by her time working alongside him in Brussels. Just Boris was long listed for the Orwell Prize. She now writes and broadcasts as a freelancer and lives in London with her husband and two sons.