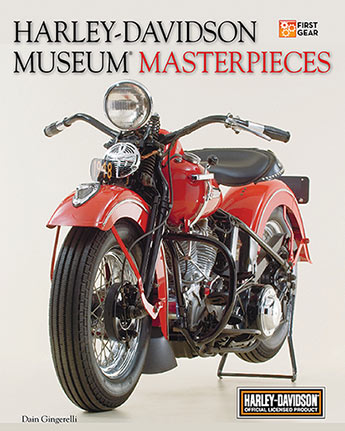 Download cover
Availability: Temporarily unavailable from this website, please try another retailer
Ask just about any motorcycle fan, and they’ll tell you that Harley-Davidson builds the ultimate motorcycle. And the motorcycles housed in Harley-Davidson’s Archive Collection represent the best of the best. Harley-Davidson Museum® Masterpieces tells the story of this amazing company through the incredible motorcycles it builds, selected from the hundreds of motorcycles in the Archive Collection. Portrait-quality photography of the book taken by expert lenseman Randy Leffingwell reveals the remarkable journey of America’s motorcycle company, from its humble beginnings to its nearly century-long dominance of an entire industry.
More books by this author More books in this series

Dain Gingerelli began writing for motorcycle and automotive magazines in 1970. He’s been an editor for six motorcycle magazines, and he’s authored numerous hot rod books for Motorbooks. His motorcycle titles include 365 Motorcycles You Must Ride and Harley-Davidson Museum Masterpieces.Randy Leffingwell wrote his first book, American Muscle, in 1989 while still on staff at the Los Angeles Times. Since then, he has authored another 47 titles for Motorbooks and its sister publisher Voyageur Press, including his most recent Complete Book of Porsche 911 and Corvette 60 Years. He has just finished Porsche 911: Fifty Years, a reexamination of the 911 story based on nearly two dozen new interviews. He lives in southern California, about 100 miles north of Los Angeles. Learn more about him on his website: www.rleffingwell.com.