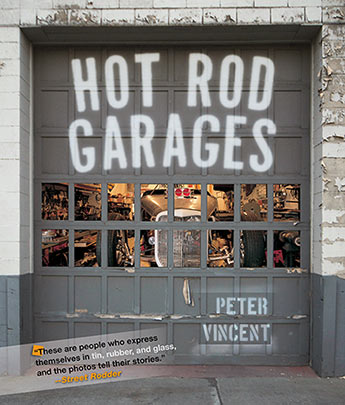 Download cover
Availability: Out of print
In Hot Rod Garages, acclaimed hot rod photographer and author Peter Vincent gives readers an intimate look inside the shops and garages of more than two dozen rod and custom builders. Unlike most hot rod books, Vincent’s takes a strictly California-centric approach in examining shops across the United States. From individuals crafting cars for their own reward to more prominent builders turning out cool rides for paying customers, Vincent and his cameras show the builders in the context of their spaces, in the process exploring how their work environments inform their creations and vice versa. Included are individuals like Pete Eastwood who have garnered attention in the hot rod press while building mostly for themselves; builders like Vern and Keith Tardel, the Kennedy Brothers, and Cole Foster with his crew at Salinas Boyz, all currently being celebrated for the traditionally styled rides they build for consumers; and high-end shops widely considered to be the cream of the industry, like Roy Brizio’s and Steve Moal’s in the Bay Area, as well as SO-CAL Speed Shop (heir to legend Alex Xydias). The result is the next best thing to being there—an exquisitely presented book that eloquently distills the varying nature of these spaces and the cars created within, revealing the countless hours spent machining, wrenching, welding, and shaping these beautiful visions to fruition.
More books by this author

Peter Vincent’s work has been featured in more than 20 galleries around the United States and has been published in the Rodder’s Journal, American Rodder, Hop Up, Street Rodder, and Rod & Custom. This is Vincent’s third book for Motorbooks. He lives in Moscow, Idaho.www.petervincentphotographer.com