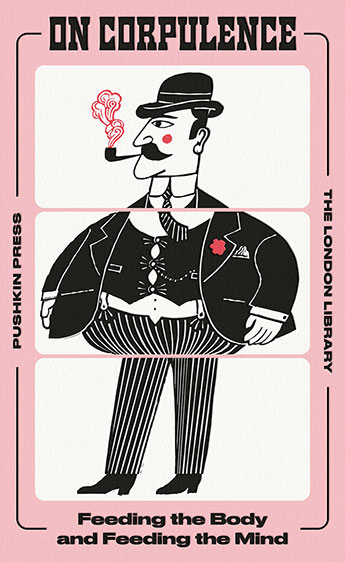 A remarkably modern book about dieting in the 1860s, celebrating the 175th anniversary of The London Library

Oh! that the faculty would look deeper into and make themselves better acquainted with the crying evil of obesity - that dreadful tormenting parasite on health and comfort.
William Banting, a short man who suffered great personal distress from his increasing fatness, finally happened upon a 'miracle cure'. So great was his relied that he wrote and published A Letter on Corpulence, Addressed to the Public. In singling out sugar and fats as the main cause of obesity, he was remarkably ahead of his time. The tract was an immediate success: thousands took up his diet; there were four editions of his book by 1869; and 'to bant' or 'banting' became a popular phrase for slimming, which lasted well into the twentieth century.
Contains also a small piece by Lewis Carroll on 'feeding the mind', in which he tells us the best way to 'consume' books.
On Corpulence is part of 'Found on the Shelves', published with The London Library. The books in this series have been chosen to give a fascinating insight into the treasures that can be found while browsing in The London Library. Now celebrating its 175th anniversary, with over 17 miles of shelving and more than a million books, The London Library has become an unrivalled archive of the modes, manners and thoughts of each generation which has helped to form it.
More books by this author

On the 24th June, 1840, the celebrated Scottish author, historian, and biographer, Thomas Carlyle, stood up at a meeting in a crowded hall in Covent Garden to proclaim the need for a new lending Library in the great metropolis of London. Carlyle's vision succeeded beyond his wildest dreams. What he called into existence that night has become, over the ensuing 175 years, the largest independent lending library in the world. Today its facade in St James's Square gives little indication that beyond it lie over a million books, covering more than 17 miles of open access bookshelves arranged within seven interlocking buildings.