The Legend of the Outlaw Biker 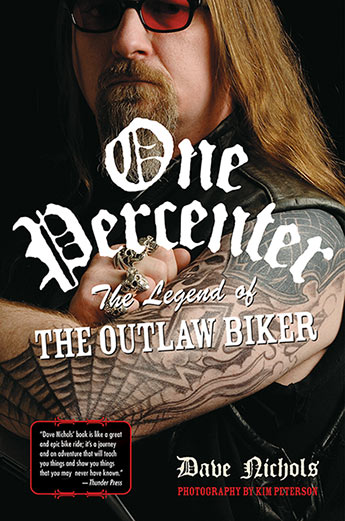 Download cover
Availability: Out of print
From the editor-in-chief of Easyriders magazine, One Percenter presents an unprecedented social analysis of American outlaw biker culture. A longtime biker and self-proclaimed nonconformist, Dave Nichols is not a subtle man. “Bikers are the last wolves in a land of sheep,” he affirms—but the motivations of today’s biking culture stretch far back into the annals of human history. One Percenter: The Legend of the Outlaw Biker illuminates the origins of rebel mentality, which began far outside of cycling: with groups from the Mongols and Huns to the Vikings, from pirates to the gunslingers of the Old West. In his signature no-nonsense style, Nichols traces his own defiant mindset from ancient times all the way into the modern era, where this one-percenter perspective is best embodied by outlaw bikers. As biographical as it is insightful, One Percenter also touches on the iconic Harley-Davidson motorcycle, gives a brief history of Easyriders magazine, and unapologetically criticizes the U.S. media for what Nichols views as a biased, unfairly negative portrayal of motorcycle clubs. Complete with an exclusive collection of photographs taken by Kim Peterson, editor of In The Wind magazine, this book offers a fascinating and analytical discussion of the rebel ethos that has become a staple of American popular culture.
More books by this author

Dave Nichols has been involved in many forms of media both in front and behind the camera since 1978. He has written and produced over 1,200 TV commercials with Shadoe Stevens, Inc., a series of television comedy specials for HBO/Cinemax, and American Top 40 for ABC Watermark. He has produced live events for Jani International and live sports programs for television, created early-learning software for Microsoft, and developed ad campaigns for radio, TV, and feature film trailers for New World Pictures. Dave has been the editor-in-chief of Easyriders and V-Twin motorcycle magazines since 1998 and is currently overseeing ten automotive and motorcycle magazine titles for Paisano Publications, including the new Road Iron custom touring bike title. Nichols was the on-camera host of V-Twin TV, a 26-episode motorcycle-related television series seen on the SPEED channel. He is also the bestselling author of Top Chops, Indian Larry: Chopper Shaman, One Percenter, and One Percenter Code, all published by Motorbooks. He lives in Ashland, Oregon, and Los Angeles and is currently creating TV series and feature film projects with HBO producer Michael Hill.Dave Nichols is the editor in chief of Easyriders and V-Twin magazines. He is an avid rider and one of the most enthusiastic supporters of outlaw motorcycle clubs in the entire motorcycle industry. Mr. Nichols lives in Edmonds, Washington.Kim Peterson has been a window to the biker world for 33 years as a photographer, writer, and editor for Easyriders and In the Wind. Several cross-country treks in the early 1970s whet his appetite for adventure, biker-style. From his West Coast base camp, he continues to travel widely for exceptional images.www.piratesmagazine.com