The Sherlock Holmes School of Self-Defence

The Manly Art of Bartitsu 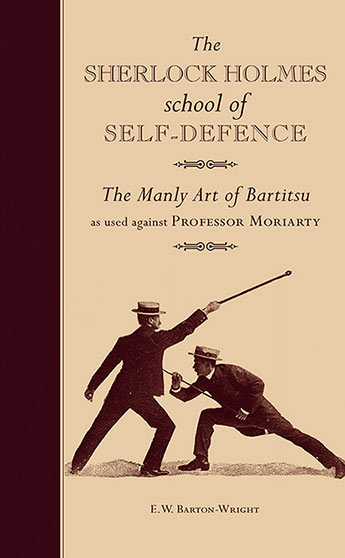 Learn how to defend yourself against an attacker using Bartitsu - with an overcoat, cane, or umbrella or even just your bare hands.

When Sherlock Holmes wrestled with Dr Moriarty on the Reichenbach Falls, he was employing a system of self-defence that was all the rage in Victorian Britain. In an age when footpads and fogle-snatchers meant a man of breeding took his life in his hands when walking across town, a martial arts craze took hold that did not escape Conan-Doyle's keen eye for research. Schools sprung up all over London, chief among which was E.W. Barton-Wright's "Bartitsu" method. The Sherlock Holmes School of Self-Defence commemorates Barton-Wright's exploits and the fighting techniques of the famous sleuth himself (though Conan-Doyle mischiveously spelled it Baristu). Learn how to defend yourself with an overcoat, cane, or umbrella, or even to wield your bicycle against an attacker. Wonderful illustrations based on original photographs instruct the reader in skills that range from the sublime to the elementary.
More books by this author

E.W. Barton-Wright (1860-1951) studied jiu jitsu and judo in Japan during the 1890s and brought the techniques he learned back to England where he set up a school-at-arms teaching in hybrid of oriental and European self-defence he called Bartitsu.