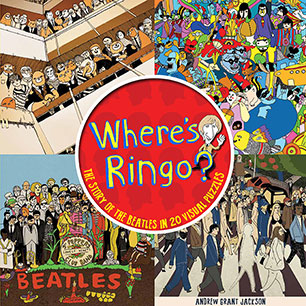 Ringo has got lost! And YOU must find him; Where's Ringo? is the ideal gift for the Beatles completist and new fan alike.

An album-sized hide-and-seek caper through the story of the Beatles, Where's Ringo? features 20 fantastically intricate original artworks inspired by key periods in the Fab Four's evolution. Throughout, the ever-present Ringo Starr has been cleverly hidden for the reader to find, along with an array of Beatle friends and memorabilia, including John Lennon's glasses, Mick Jagger and the Blue Meanies. Each illustration is accompanied by insightful commentary and trivia about the original artefacts or events that inspired it - be they album covers, film scenes or legendary live appearance - with, of course, Ringo's unique contribution. A charming puzzle book for both young and old, Where's Ringo? is the ideal gift for the Beatles completist and new fan alike.
More books by this author

DAVID RYAN ROBINSON is a UK-based British illustrator and graphic designer who has worked on numerous commissions, mostly using his favourite item of stationery, the Uniball Eye Pen. Past clients include the Guardian, The Times, Cartoon Network, Risk Magazine, the Financial Times, EDF Energy, Becks Beer, the BBC, TBA Magazine and Sports Relief. He is currently working as a designer for Cartoon Network at Turner Enterprises. See www.davidryanrobinson.com.

TAKAYO AKIYAMA is a London-based Japanese illustrator/cartoonist who rarely stops drawing. She was born in Japan and is currently based in London. She recently became a full-time freelancer and has many years of experience in illustration, comic, printmaking, T-shirt and textile design. www.cargocollective.com/

OLIVER GODDARD is a UK-based fashion designer, printed textile designer, and illustrator. He graduated from Manchester Metropolitan University with a First Class BA (Hons) Degree in Fashion. In 2005 he was a winner of the RSA Fashion Design Direction award. He now lives and works in Brighton working on commissions for both high street and high-end fashion labels and publishers, he has international representation.

ANDREW GRANT JACKSON's book Still the Greatest: The Essential Songs of the Beatles' Solo Careers was excerpted by RollingStone.com and recommended by USA Today and The Nation, amongst others. His website is www.solobeatles.com.