Who's Who of Doctor Who

A Whovian's Guide to Friends, Foes, Villains, Monsters, and Companions to the Good Doctor 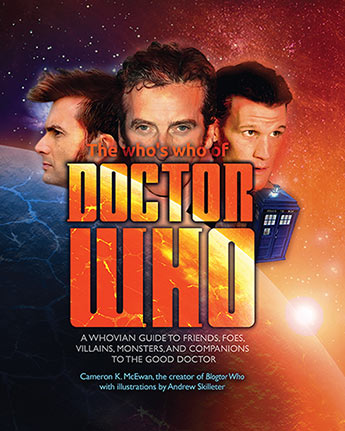 Download cover
Availability: Not available to order from this website, please try another retailer
The Who's Who of Doctor Who is the must-have handbook exploring the dynamic cast of characters in Doctor Who over the past half century. Discover details about the intimate relationships between the characters, their loyalties, their betrayals, and of course how they collide with the good Doctor through time. With over 300 entries from companions and friends to aliens and villains, and loaded with photos from fifty years of Doctor Who, readers can learn about the Weeping Angels, River Song, the Master, and of course the dreaded Daleks. With text from Cameron K. McEwan, the creator of Blogtor Who and featuring artwork from the popular Doctor Who illustrator, Andrew Skilleter, this is essential reading for all Whovians.
More books by this author

Cameron K. McEwan is the man behindBlogtor Who (www.blogtorwho.com), a fan site dedicated to Doctor Who. Started in 2008, Blogtor Who is now one of the most popular Doctor Who blogs in the world, on some days receiving over 80,000 page views with nearly 40,000 followers on Twitter. Its popularity and success have gained the Blogtor access to the production team, and he is regularly invited to press events (such as the Official Convention in 2012 and the Official Celebration in 2013). He has interviewed Matt Smith, Steven Moffat, Mark Gatiss, Murray Gold, and many others involved in the production of Doctor Who. Cameron makes appearances at conventions, hosting panels, and interviews while also making the odd television appearance on the BBC and in the U.S.Cameron writes for sites like Den of Geek, Cult Box, and The Huffington Post and reviews television weekly on BBC London. He currently lives in London with his three trousers.Andrew Skilleter is an English illustrator best known for his professional association with Doctor Who between 1979 and 1995. He has illustrated hundreds of covers across numerous genres and media including books, DVDs, calendars, and magazines. He also wrote and illustrated Blacklight: The Doctor Who Art of Andrew Skilleter.