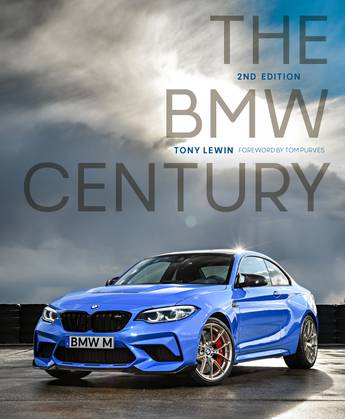 BMW Century details more than one hundred years of BMW from its historic aviation roots to today's trend-setting cars and motorcycles.

Celebrate more than 100 years of Germany's best two- and four-wheeled rides. This handsome volume is filled with images, history, and in-depth review of the incredible machines BMW has created year after year.

Established in 1916, BMW is one of the automotive and motorcycle industry's oldest and most-respected manufacturers. Over the past 100-plus years, the company has passed through myriad incarnations. BMW Century chronicles this remarkable transportation story through the cars and motorcycles manufactured, from the 1923 R32 motorcycle to today's sleek electric, hybrid, and high-performance cars.

BMW Century showcases how the company's visionary team systematically rebuilt BMW in the post-World War II years into the spectacular success we know today-a company with sales in excess of two million cars annually, led by its top-selling 3-series. BMW's motorcycle division is no less legendary. It began with the 1923 avant-garde R32, which featured a 180-degree, horizontally opposed twin, the engine configuration that would become BMW's hallmark.

Over the decades, BMW used that configuration to power groundbreaking machines like the R90S, R100RS, and R80GS. Beginning in 1983, the company added add three- and four-cylinder machines to their offerings, culminating in today's spectacular S1000RR sport bike. From the pre-war motorcycles to the iconic R-series twins of the 1970s and '80s to the mighty M-cars and superbikes of today, BMW Century offers a full review of German engineering at its zenith.

The book is illustrated generously with hundreds of historic, contemporary, and racing photographs-many sourced from BMW's historic archives-and thorough text covering BMW's full history. This is the one volume no BMW aficionado will want to be without.
More books by this author

Tony Lewin is a lifelong automotive commentator and industry analyst and has spent most of his career testing cars, analyzing them, and reporting on the ups and downs of the global enterprises that build them. He has been a regular writer and editor for Automotive News Europe and launched several pioneering titles for The Financial Times as well as contributing regular columns for other national and international publications. Today, Lewin divides his time between journalism, books, and translation work. His titles for Motorbooks include BMW Century, How to Design Cars Like a Pro, The Complete Book of BMW, and Speed Read: Car Design. He also translated Junkyard: Behind the Gates at California's Secretive European-Car Salvage Yard for Motorbooks. He lives in East Sussex, England.