50 Years of the Ultimate Driving Machines 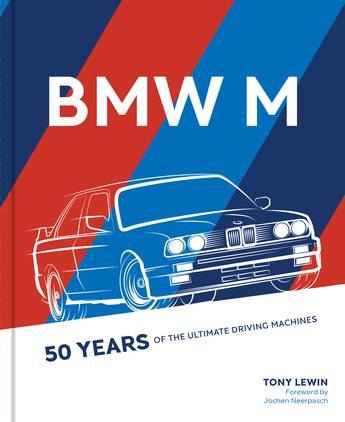 If BMW cars are the “ultimate driving machines,” then BMW's M cars (and motorcycles) are the legendary manufacturer's ne plus ultra offerings. BMW M celebrates the 50th anniversary of this prestigious German enthusiast brand.

BMW M-Series celebrates the 50th anniversary of these legendary German performance cars, detailing both its production and motorsport stories with expert commentary and fascinating photography. BMW launched the Motorsport, or "M", division in 1972 to formally support its growing and successful racing program. Wisely, BMW leveraged that racing credibility to create limited-edition, high-performance production cars, the first being the M1 supercar of 1978. Tested and tuned at a dedicated facility located at the legendary Nurburgring, BMW's M cars are true "driver's cars" focused first and foremost on handling and performance. Still, they are docile enough when not driven aggressively to serve as comfortable high-end daily drivers.

Since the late 1980s, the range of M models has broadened considerably and now includes coupes, convertibles, and sedans in M2, M3, M4, M5, and M8 flavors along with high-performance X-series M SUVs. Early M cars like the M1 and late 1980s M3 and M6 are now desirable collector cars welcomed at top collector auctions and commanding premium prices. With decades of racing and production success and, literally, no signs of slowing down, BMW's M cars hurtle full speed to their 50th anniversary in 2022. BMW M offers the history no Bimmer fan will want to be without.
More books by this author

Tony Lewin is a lifelong automotive commentator and industry analyst and has spent most of his career testing cars, analyzing them, and reporting on the ups and downs of the global enterprises that build them. He has been a regular writer and editor for Automotive News Europe and launched several pioneering titles for The Financial Times as well as contributing regular columns for other national and international publications. Today, Lewin divides his time between journalism, books, and translation work. His titles for Motorbooks include BMW Century, How to Design Cars Like a Pro, The Complete Book of BMW, and Speed Read: Car Design. He also translated Junkyard: Behind the Gates at California's Secretive European-Car Salvage Yard for Motorbooks. He lives in East Sussex, England.