Robert E. Petersen and the Creation of the World's Most Popular Car and Motorcycle Magazines 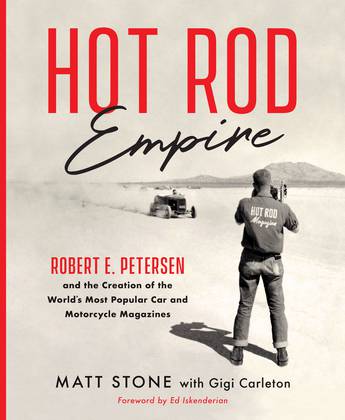 Hot Rod Empire celebrates the birth and explosive growth of the transportation hobby under Petersen’s watch.

The end of World War II marked the release of pent-up war-years energy and the desire to live. For many this meant indulging in long-denied purchases, like a new car. For another group, including young vets, it meant a return to car building and racing. Money, exciting new cars, and speed parts all flowed freely in post-war America.

Robert Petersen, a young SoCal-based photographer and Army Air Corps vet, noted the rapidly growing hot rod scene in and around Los Angeles. His first move was to organize the Los Angeles Hot Rod Exhibition in 1948. His second, and brilliant, move was to launch at the same event the first edition of Hot Rod magazine. From this launch pad, Petersen Publishing Company would grow to become the most influential enthusiast publisher in America.

Petersen’s magazines were rallying points for all aspects of the car, truck, and motorcycle hobbies, well as nurturing and promoting all aspects from car building to racing to show events. Hot Rod, Motor Trend, Car Craft, Motorcyclist, Off-Road and Four Wheel Drive and some 75 other enthusiast titles dominated magazine racks and provided substantial influence over transportation and numerous other hobbies.

Hot Rod Empirecelebrates the birth and explosive growth of the transportation hobby under Petersen’s watch.
More books by this author

Matt Stone (Glendale, California), former executive editor of Motor Trend magazine, has been a professional automotive journalist and photographer since 1985. He has authored and photographed several books, including the bestselling 365 Cars You Must Drive, My First Car, McQueen’s Machines, and McQueen's Motorcycles all from Motorbooks.

Gigi Carleton, for more than 40 years, worked at Petersen Publishing Company as Margie and Robert E. Petersen's executive secretary and personal manager. She started there as a temp, working on organizational details for the Motor Trend 500 stock car race, sponsored by Petersen Publishing, at Riverside International Raceway each year. She was then hired by the Petersens as their full time “right arm” in the administration of all executive aspects of the business and many of their personal and philanthropic activities. Gigi is now president of the Margie and Robert E. Petersen Foundation.

Ed Iskenderian is one of the founding fathers of the aftermarket speed equipment business, and a worldwide legend in the field of high performance camshaft design and production. “Isky” launched his business in the late 1940s, using a single homebuilt cam grinding machine, in a small, dirt-floored shop in the back of a friend’s tool and die company. His Isky Racing Cams, still a world leader in the high performance camshaft business has sponsored many famous, championship winning Bonneville and drag racers, including the late Mickey Thompson and Don “Big Daddy” Garlits. Iskenderian, now 97 years old, still runs the business that bears his name.