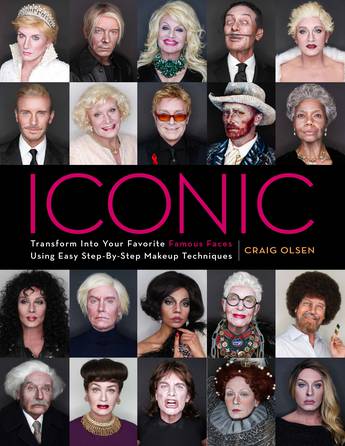 Using everyday makeup and the tips, tricks, and techniques in Iconic, transform yourself into 20 glamorous celebrities of yesterday and today—most in less than an hour!

Artist Craig Olsen teaches you how to transform yourself into 20 iconic celebrities from yesterday and today, from Queen Elizabeth I to Diana Ross, using simple facial makeup techniques and everyday products. Learn the secrets to creating believable, transformative looks with easy-to-follow instruction, and a wealth of cool inspiration. With step-by-step photographs for each celebrity look, Craig covers all of the tools and materials you will need as well as the tips, tricks, and techniques to make you picture perfect-ready for your next themed party, event, or Instagram post. Learn how to quickly turn into:

The techniques can also be applied for everyday appearance to conceal aging or for a completely different look. With this book as your inspiration and guide, you, too, can become an icon.
More books by this author

Craig Olsen is a multi-media transformational artist. A graduate from Cornish College of the Arts with a BFA in Theatre, Craig's training in acting also extends to theatrical makeup, costume, and set design. Upon graduating, Craig set his sights on Los Angeles where he was cast in a wide variety of network television, theatre, and film roles. After creating and owning several premiere interior design showrooms and setting the stage for other people's lives through interior design, Craig—at the height of his twenty-year highly successful run—made a professional shift. He wanted to get back to himself and focus exclusively on his private celebrity clientele as well as return to his acting roots. During this same time, Craig discovered a cache of personal historical letters by a group of prominent 1950s New York City drag queens and knew there was a story to be told. As a producer, Craig made the outstanding documentary film P.S. Burn This Letter Please, which traces the remarkably lived experiences of transformational illusionists during a time when this type of self-expression was illegal in the United States. Craig is currently starring in and workshopping an original theatrical play, My Garden in Hell, written by his creative partner Billy Weiner, with Craig playing the legendary fashion icon Diana Vreeland. After realizing he could convincingly become and perform as Diana Vreeland through the art of makeup and illusion, Craig was curious to discover what other transformations were within his reach. During the pandemic and resulting quarantine, Craig suddenly found himself, like the rest of world, with the unlikely combination of extra time and limited physical resources. Equipped with a mirror, makeup, and vivid imagination at his disposal, Craig began creating and utilizing his own self-taught dramatic makeup techniques to combine his varied artistic talents and transform himself into virtually anyone. Craig has produced and starred in the long-running podcast The Craig and Robbie Hour on Global Voice Broadcasting. In addition, he is the Chairman of the Board for Los Angeles' premier contemporary ballet company Barak Ballet and is a trustee of the Edward F. Limato Foundation.