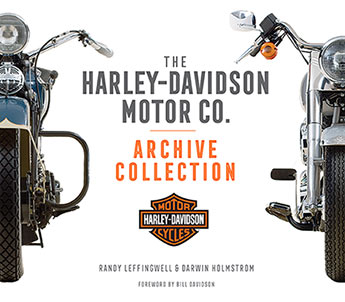 The Harley-Davidson Motor Co. Archive Collection presents the most lusted-after motorcycles ever built in studio portraits.

More than one hundred years ago the freedom-loving, speed-hungry motorcycle fanatics who founded Harley-Davidson began producing what would become the most important motorcycles in history.

The company’s founders knew from the start that they had created something special. Almost immediately they began collecting at least one example of virtually every model the company ever produced, from serial number one, built in 1903, to the amazing luxury touring bikes the company builds in the twenty-first century.

The Harley-Davidson Motor Co. Archive Collection, published in conjunction with Harley’s official museum in Milwaukee, showcases the very best motorcycles the company has collected in its first 115 years of operation. This book gives motorcycle enthusiasts an opportunity to pore over the bikes in Harley-Davidson’s collection, and to linger over the exquisite details that have made Harley-Davidson the most American of icons.

Filled with detailed studio photographs and histories of the motorcycles featured from Harley’s collection, vetted by the experts at Harley-Davidson, this book captures the excitement that has made Harley-Davidson motorcycles the most lusted-after vehicles ever built.
More books by this author

Darwin Holmstrom has written, co-written, or contributed to over thirty books on subjects ranging from motorcycles and muscle cars to Gibson Les Paul guitars, including Indian Motorcycles, GTO: Fifty Years, Lets Ride: Sonny Bargers Guide to Motorcyclying,Top Muscle: The Rarest Cars from Americas Fastest Decade, BMW Motorcycles, The Life Harley-Davidson, and The Complete Idiots Guide to Motorcycles. Darwin is the senior editor for Motorbooks. Prior to that he served as Midwestern editor for Motorcyclist magazine.
Randy Leffingwell wrote his first book, American Muscle, in 1989 while still on staff at the Los Angeles Times. Since then, he has authored another 47 titles for Motorbooks and its sister publisher Voyageur Press, including Porsche 911 50 Years, Corvette 60 Years, and Harley-Davidson Myth and Mystique. He lives in southern California, about 100 miles north of Los Angeles.