All the Production Models Since 1903 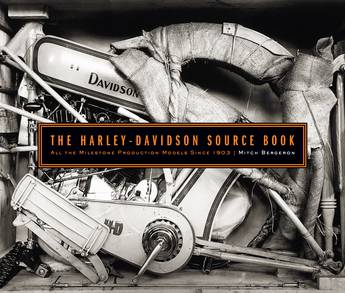 The Harley-Davidson Source Book is the ultimate curated survey of the ultimate motorcycle. It details the most significant designs and models throughout the Motor Company's history.

The Harley-Davidson Source Book celebrates these iconic motorcycles in encyclopedia form. Rich with vivid photography, insightful commentary, and production specs and data, this is the #1 resource for die-hard Harley fans all around the world.

In The Harley-Davidson Source Book, acclaimed Harley-Davidson historian Mitchel Bergeron covers every motorcycle the company has built, from the very first prototype to the Silent Gray Fellow to the latest CVO Electra Glides and Softails. They're all here-the Knucklehead, the Panhead, the Pea Shooter, the KR, the Sportster, the XR750, the Shovelhead, the Evolution, the Twin Cam, the V-Rod, and all the rest. An authoritative text by noted Harley-Davidson historian and journalist Mitchel Bergeron complemented by modern and period photography and archival marketing materials make this Harley reference complete.

The Harley-Davidson Source Book showcases the most storied, celebrated, and downright wild motorcycles ever produced by the Motor Company. This is the ultimate encyclopedia of the ultimate motorcycle.
More books by this author

A motorcycle and automotive enthusiast from an early age, Mitch Bergeron has worked in the motorcycle industry and has built a reputation as a custom builder with an eye for detail. His keep-it-simple (because it is) approach to his craft and his lifestyle has led to many awards, such as Easyriders Invitational Best of Show, and many Best of Show Regionals as well as VQ magazine awards. Bergeron's bikes have also featured in television appearances such as Biker Build-off, Chopper Nation, and Chopper Challenge. He's shared his expertise through technical articles for Easyriders and Street Chopper and has had many of his custom builds featured in national and international magazines, as well as the book The Art Of The Chopper. Bergeron resides in Quebec, Canada.