Motorcycle Adventurers, Cruisers, Outlaws and Racers the World Over 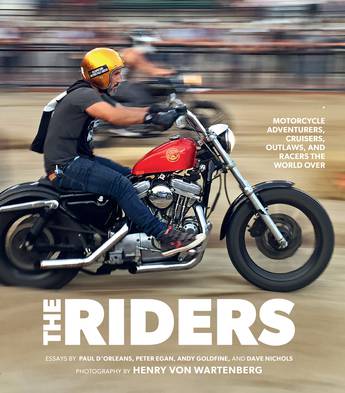 In The Riders, photographer and author Henry von Wartenberg (Art of BMW Motorcycles) documents motorcycle culture around the world with stunning images created in more than 30 countries over the past 20 years.

The Riders explores and celebrates the differences and common bonds among motorcyclists around the world via Henry von Wartenberg's engaging and inviting documentary photography.

Motorcyclists feel a kinship with fellow riders that is not easily explained but runs deeper than choices like bike brand or riding focus. You see it sometimes with a wave of the hand from one lane to the next, with an appreciative nod at a stoplight, or in a U-turn to check on a rider stranded on the roadside. Motorcyclists make a conscious decision to ride an inherently dangerous device, a machine open to the elements and vagaries of nature. A motorcycle demands a level of attention far greater than a car and consequences for inattention are much graver. On the flip side, riding a motorcycle offers an unmatched sense of freedom, adventure, and involvement. Von Wartenberg, a long-time rider himself, has traveled the world on a variety of assignments, some motorcycle related and others not. But wherever he was on the planet, he always found a way to connect with fellow riders and document their culture and machines. Over the course of his travels he has photographed riders in more than 30 countries including Bolivia, Austria, Canada, Chile, China, Costa Rica, France, Mongolia, Mexico, Italy, Germany, Iceland, Peru, Spain, the United States, England, and Thailand to name a few.

What emerges on the pages of The Riders is the amazing breadth of the motorcycling world, from outlaw clubs to adventurers to racers to boulevard cruisers to those for whom a motorcycle is the only form of transportation as well a means to make a living. The Riders is a book sure to be enjoyed by anyone who embraces the two-wheeled world.
More books by this author

Paul d'Orleans, better known as the publisher of the website The Vintagent, travels the world following the vintage, custom, and electric motorcycle scenes. As a rider, collector, and recognized expert on moto-history, he is a passionate advocate for motorcycles and writes for numerous magazines (including Cycle World, Classic Bike Guide, Kraftrad, etc), and websites worldwide. He also is co-founder of the Motorcycle Arts Foundation and guest curator at the Petersen Museum in Los Angeles (Custom Revolution, Electric Revolution), He can be seen commenting on the Las Vegas motorcycle auctions for NBCSN, and he resides in San Francisco, California.

Dave Nichols has been involved in many forms of media both in front and behind the camera since 1978. He has written and produced over 1,200 TV commercials with Shadoe Stevens, Inc., a series of television comedy specials for HBO/Cinemax, and American Top 40 for ABC Watermark. He has produced live events for Jani International and live sports programs for television, created early-learning software for Microsoft, and developed ad campaigns for radio, TV, and feature film trailers for New World Pictures. Dave has been the editor-in-chief of Easyriders and V-Twin motorcycle magazines since 1998 and is currently overseeing ten automotive and motorcycle magazine titles for Paisano Publications, including the new Road Iron custom touring bike title. Nichols was the on-camera host of V-Twin TV, a 26-episode motorcycle-related television series seen on the SPEED channel. He is also the best-selling author of Top Chops, Indian Larry: Chopper Shaman, One Percenter, and One Percenter Code, all published by Motorbooks. He lives in Ashland, Oregon, and Los Angeles and is currently creating TV series and feature film projects with HBO producer Michael Hill.

HENRY VON WARTENBERG is a freelance photographer and writer based in Argentina, whose work has been featured in many books and magazines, including National Geographic Adventures. He is the photographer for Motorbooks' Art of BMW. Through his publishing company, Triple Ve Editores, he has published several books of his photography including Red Deer-Stag Hunting in Argentina, Motos Clasicas en Argentina, The Best of Argentine Polo, and Buenos Aires in Stone and Bronze. Henry lives in Tigre, Argentina, with his wife and two daughters.