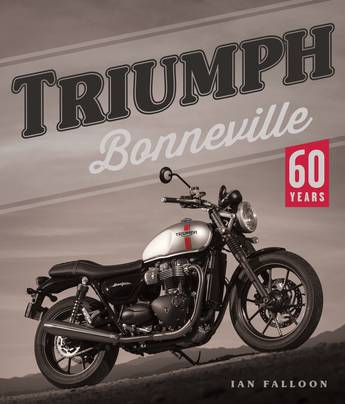 First manufactured in Great Britain in 1959, Triumph's legendary model resonates deeply with motorcycle enthusiasts worldwide who love its style, sound, performance, and undeniable coolness. It's no surprise that Triumph was Steve McQueen's favorite ride.
The Bonneville's story is one of successes and challenges as Triumph grew steadily in the post-World War II decades to become America's most successful "import" motorcycle marque. Triumph won every championship worth winning, owned the world speed record for fifteen years, and wooed Hollywood's hottest stars.
Bonneville was Triumph’s halo machine, one of the highest performance motorcycles of the 1960s. However, as competing marques eventually eclipsed the Bonneville in the 1970s, Triumph management struggled, leading first to bankruptcy and then to the demise of the company in 1983.
Triumph was resurrected by British industrialist John Bloor in the late 1990s to become a twenty-first century global success story, which includes a revived and thoroughly retro-contemporary Bonneville range.
More books by this author


Ian Falloon is one of the world’s foremost motorcycle historians. In his career as an author, he has penned more than forty books on motorcycles. His titles include The Ducati 750 Bible, Ducati 900 Bible, The Moto Guzzi Story, Honda Story, Kawasaki Story, BMW Story, The Book of MV Agusta Fours, Moto Guzzi Sport Bible and Laverda Twin and Triple Bible. He has a small collection of classic sporting motorcycles, including a 1974 Ducati 750 Super Sport, which he has owned since 1976. A contributor to a number of motorcycle magazines around the world, Ian Falloon was born in New Zealand, but currently lives in Australia.