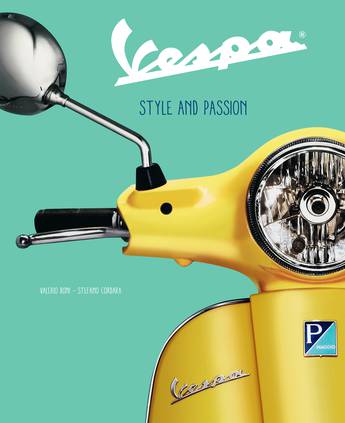 In time for Vespa's 75th anniversary, Vespa: Style and Passion is the official history of the iconic Vespa scooter, with rich visuals that include studio images, period advertisements, and rare archival photographs.

Perfect in its compactness, in its functionality, and in its widely imitated design, the Vespa scooter is not only a means of transport, but a true icon. In celebration of Vespa's 75th anniversary, Vespa: Style and Passion is the lavishly illustrated official history of the legendary scooters and the culture they've inspired.

Introduced by the Italian firm Piaggio in 1946 with the model 98, Vespa enjoyed quick success. The scooters' diminutive size and affordability were perfect for promoting postwar mobility. But as with most novel designs, it would also be highly imitated, destined for icon status. From Piaggio's origins to the first Vespa prototypes to todays forward-looking Elettrica model, Vespa: Style and Passion is the ultimate retrospective of this beloved brand. A rich selection of visuals includes dozens of studio images of the most significant models from throughout Vespa history-including classics like the 125, 150 GS, Super Sprint, Primavera, and Rally-as well as period advertisements, rare archival photographs, and images of Vespas in popular culture and motorsport. Mod culture, perhaps most responsible for spreading scooter culture, is also given its due with images of customised Vespas.

Vespa: Style and Passion relates with elan and high design the endless evolution of a marque that has conquered six continents, with 19 million units sold. The Vespa is not simply a scooter, but the scooter, known and appreciated the world over-a rare example of a motor vehicle that survived crises and fashions, always remaining faithful to the original concept. This is the definitive story of that influence.
More books by this author

Valerio Bonis journalism career began in 1977 when his passion for motorcycles led him to become a sportscaster for off-road racing. Subsequently, he began working as an editor for motorcycle magazines, writing about the launch and test rides of hundreds of new models. He is the author of a series of annuals about GP motorcycle races and has published books about BMW, Ducati, Gilera, Porsche, and Vespa.

Stefano Cordara began his career as a journalist in 1992, working as a motorcycle test rider. For ten-plus years he also competed in international motorcycle races, including the legendary Suzuka 8 Hours. He is the managing editor of the online publishing project RED-live and continues to write for the Gazzetta dello Sport, the sports newspaper where he collaborated on a series of books dedicated to Ducati motorcycles.