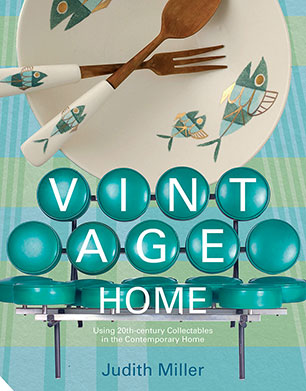 Vintage Home is both a practical collector's guide - what to look out for - and a celebration of the period.

Vintage Home covers both serious and costly designer creations, which sell in major auction houses worldwide, and cheerful mass-produced kitsch, which you can pick up in car boot sales, charity shops, flea markets and yard sales. It looks at objects from around the world that were made for every taste and budget.

Designers in the twentieth century were driven by the possibilities of mass-production and excited by the host of new materials. The period is also infused with the importance of women after the First World War and the emergence of a youth culture, and the new market for modern, fashionable goods from the 1950s onward. Where the older generation were used to 'make do and mend', the young embraced wholeheartedly the disposable society. They replaced the old with something new and fashionable, a taste epitomised by colourful plastic furniture and paper dresses. The consequence is a fabulous array of every type of object for the collector.
More books by this author

JUDITH MILLER began collecting in the 1960s while a student at Edinburgh University in Scotland. She has since extended and reinforced her knowledge of antiques through international research, becoming one of the world's leading experts. In 1979 she co-founded the international best-seller Miller's Antiques Price Guide and has since written more than 100 books. Judith appears regularly on radio and TV including the BBC series The House Detectives, ITV's Antiques Trail and Discovery's It's Your Bid. She is an expert on BBC's Antiques Roadshow and Priceless Antiques, and is a regular on the Martha Stewart Show and CNN. Judith also frequently contributes to numerous newspapers and magazines including The Financial Times, The Telegraph, Woman and Home and BBC Homes and Antiques.